Atmospheric Pressure Releases: Which Require Dispersion Modeling?
Dispersion modeling of atmospheric releases from pressure-relief valves and other…
IN THE NEWS

A 'liquid' platinum catalyst outperforms solids at low temperature
Platinum is widely used for many catalytic reactions, and because…

Materials of Construction: Stainless Steel Versus Nickel Alloys
Nickel alloys have long been the default choice for demanding…
FACTS AT YOUR FINGERTIPS

Removal of dissolved ions from industrial process water, boiler feedwater or wastewater is a common challenge for facilities in the chemical process industries (CPI). Ion exchange (IX) systems offer one possible solution for demineralization, purification or wastewater-treatment applications. Ion exchange systems facilitate reversible chemical reactions in which the ions targeted for removal are captured electrostatically and replaced by other ions of similar charge. Key components of IX systems are ion exchange resins. This one-page reference provides an overview of how IX resins work in industrial water treatment.

IX resins are generally composed of crosslinked organic polymers shaped into small beads usually measuring between 0.25 and 1.25 mm in diameter. The most common IX resin material is polystyrene with divinylbenzene crosslinks. This type of resin is used in the majority of IX applications. Although the basic resin components are often the same, the resins have been modified in many ways to meet the requirements of specific applications and provide longer resin life.

The polymer matrix of the beads contains dispersed ion-active sites, which are charged functional groups covalently bound to the polymer backbone. The charged functional groups, which can be negative or positive, attract ions of the opposite charge through electrostatic interactions. For example, a common functional group found in cation IX resins is the sulfonate anion (SO3–). A counterion solution containing sodium cations (Na+) is applied to the resin. The Na+ ions are held to the bound SO3– anions by electrostatic attraction, so the resin carries a net neutral charge (Figure 1).

Counterions for the resin are chosen such that when they are exchanged and are released into the treated water, they will not present problems for subsequent use, and the problematic ions will be removed. In general, the greater the size and valency of an ion, the greater affinity it will have with ions of an opposite charge.

In general, water containing undesirable ions flows through a bed of resin beads and the problematic ions are exchanged for ions of similar charge that were first applied to the resin. The functional groups and initial counterions are designed such that the ions in the treated water will have a greater affinity for the charged functional groups and will dislodge the existing ions and take their place, bonding with the functional groups through shared electrostatic attraction [2].

For example, in water-softening applications, water containing Ca2+ or Mg2+ ions flows through the resin bed. Since the SO3– functional groups have a greater affinity for the hardness cations than for the Na + ions, the hardness ions displace the Na+ ions, which then flow out of the IX unit as part of the treated stream, while the Ca2+ or Mg2+ are retained by the IX resin [2].

The impurities are captured from the feedwater until they saturate the IX resin material, after which they must be flushed out with a regenerant solution. These typically consist of concentrated salts, acids or bases. By flushing the resin, the contaminant ions are released into a waste stream, and the cations and anions in the resin are restored for another cycle.

Resins are designed to resist thermal degradation and oxidizing agents, as well as organic fouling. In addition to polystyrene-divinylbenzene resins, there are newer resins with an acrylic structure, which increases their resistance to organic fouling. 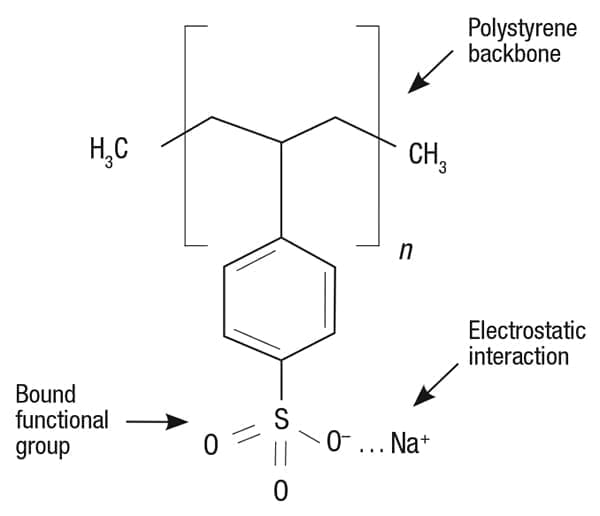 Figure 1. Charged funtional groups covalently bound to the polymer backbone of the ion exchange resin are key to its ability to remove undesirable ions from treated water

The ionizable groups attached to the resin bead determine the functional capability of the resin. Generally, industrial-water-treatment resins are classified into four categories:

Strong acid cation (SAC) exchange resins. SAC resins are composed of a polystyrene matrix with a sulfonate (SO3–) functional group that is either charged with sodium ions for water softening applications, or hydrogen ions (H+) for demineralization.

Strong base anion (SBA) exchange resins. SBA resins are typically composed of a polystyrene matrix with fixed anions at exchange sites that yield either chloride ions or hydroxide ions (OH–).

Weak base anion (WBA) exchange resins. WBA resins are unique in that they do not have exchangeable ions, and are therefore used as acid absorbers to remove anions associated with strong mineral acids.

Chelating resins are also available for selective removal of certain metals and other substances.