Vanadium recovery from steel slag scales up
A hydrometallurgical process for recovering vanadium from slag, a byproduct…
BUSINESS NEWS

A hydrometallurgical process for recovering vanadium from slag, a byproduct of steelmaking, has been significantly scaled up. Previously deployed at mini-pilot and bench scales, the process, developed by Neometals Ltd. (West Perth, Australia; www.neometals.com.au), has now been expanded by a factor of 25, to process 14 tons of slag (corresponding to a throughput of around 25 kg/h) from three different steel mills operated by SSAB (Stockholm, Sweden; www.ssab.com). In this demonstration project, vanadium recovery rates exceeded 75% at steady state, with over 99.5% vanadium pentoxide (V2O5) purity. This hydrometallurgical approach has advantages over traditional, energy-intensive pyrometallurgical approaches to vanadium recovery, which involve incineration, smelting and high-temperature reactions. 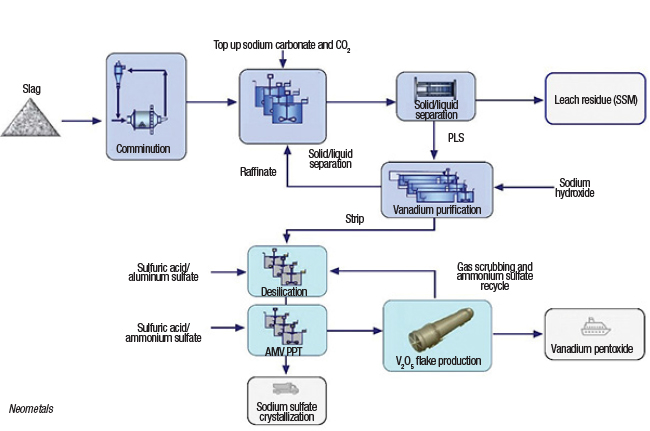 The process (diagram) begins with comminution of the slag, followed by multiple leaching steps using alkaline carbonate process water, resulting in a solids residue that is filtered, repulped and washed to recover any additional soluble vanadium. The vanadium-bearing pregnant leach solution (PLS) is subsequently filtered and fed to an extraction unit, which employs a vanadium-selective solvent to yield an alkaline vanadium solution, followed by scrubbing and stripping. The strip solution was shown to be suitable for conventional V2O5 downstream processing, including desilication, precipitation and calcination. Notably, in the demonstration project with SSAB, the resulting strip solution showed a higher-than-expected vanadium concentration, which means that upon further scaleup, the overall process footprint, as well as chemical consumption and waste production, can be reduced, leading to lower costs. Neometals also notes that the washed leach residue could potentially be a salable byproduct for use with concrete or other building materials.

With pilot-scale performance confirmed, Neometals now anticipates further scaleup to eventually process 200,000 ton/yr of slag in the multistage circuit. At commercial scale, Neometals plans to regenerate the carbonate in the leach circuit using CO2 captured from emissions sources, enabling the process to operate with extremely low atmospheric emissions. Last year, the company signed an agreement with Critical Minerals Ltd. to study the feasibility of building a commercial-scale vanadium-recovery facility in the Port of Pori, Finland.