This pusher centrifuge needs only one motor 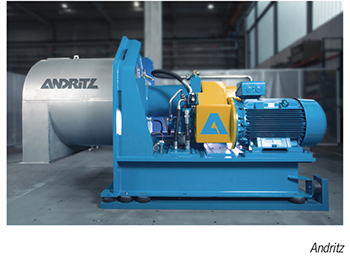 While traditional centrifuges have separate pusher and drive motors, the ecoOne pusher centrifuge (photo) has only one motor for both functions, thus significantly reducing installed power and power consumption. Pusher centrifuges with two motors generally only require the full power of the drive motor during the startup process, and the drive motor usually operates at partial load during steady-state operation. Conversely, the pusher motor runs at virtually no-load during machine startup because there are no solids in the machine yet to be pushed. Hence, the pusher motor does not operate under load until stationary operation begins. The ecoOne technology allows the reserve capacity available for pushing to be used for accelerating the basket during the startup process, while the reserve capacity available for the startup process can be used for pushing during stationary operation. This results in significantly lower installed power use and a motor that operates in the optimum efficiency range at all times. Total power consumption is thereby reduced by around 10 to 20%, while the installed power is reduced by around 20–40%, says the company. Furthermore, the new high-pressure pushing system cuts hydraulic fluid use by up to 40%. — Andritz AG, Graz, Austria

Scrolling or Pushing? Choosing the Right Type of Filtration Centrifuge
Understanding the working principles of scrolling and pushing centrifuges can help when deciding which type to use. Feed properties and…
Show Preview: IFAT Munich
IFAT 2022, the world’s leading trade fair for water, sewage, waste and raw materials management takes place from May 30…
Facts at your Fingertips: Centrifuge Separation Capacity
This one-page reference describes how to measure the capability of a given centrifuge to separate solids from a liquid phase.…
New disc technology boosts centrifuge separation capacity
UniDisc (photo) is this company’s latest innovation for disc stack separators. This new disc technology is said to increase separation…
Launch of a new generation of decanter centrifuges
This new generation of decanter centrifuges (photo) will complement this company’s existing A-series for industrial, F-series for food and D-series…