Polylactic acid (PLA, polylactide; Figure 1) is a thermoplastic aliphatic polyester that is derived from a number of renewable starting materials, such as starch and sugarcane, via bacterial fermentation. PLA is semicrystalline or amorphous, rigid, resilient and an ultraviolet-light-resistant material, with similar characteristics to common petrochemical industry plastics, such as polyethylene, polypropylene and polystyrene. PLA is used in plastic films, bottles and biodegradable medical devices. It figures among the most highly consumed bio-based plastics worldwide. 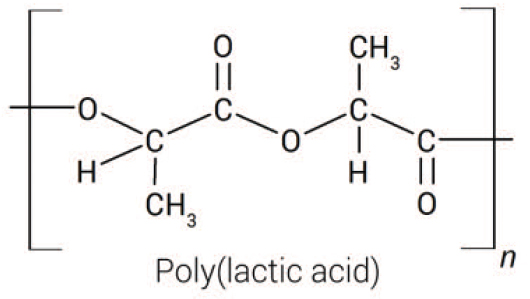 PLA rapidly absorbs moisture from the atmosphere and is also temperature-sensitive (storage temperatures should be below 122ºF). In order to preserve PLA properties and characteristics, exposure to ambient (undried) air should be minimized. PLA is usually delivered in moisture-resistant containers, including foil-lined boxes, which can prevent moisture regain during shipping and storage. PLA is mainly used in packaging, textiles, nonwoven fabrics, electronics, automotive parts, medical devices and cutlery. Packaging is the largest application market for PLA, and will likely grow as new heat-resistant PLA blends are developed.

Figure 2. The diagram shows the production process for PLA, starting from corn

Starch hydrolysis. Shelled corn is fed to grain cleaners, then sent to steeping vessels, where it is soaked in a dilute solution of sulfur dioxide, produced in a sulfur burner. The solid matter slurry obtained is submitted to a sequence of unit operations to recover cornstarch, while the steep water is concentrated in evaporators and sent as corn steep liquor (CSL) to the downstream process stages. The starch is then mixed with enzymes and sodium carbonate in the hydrolysis area to convert it to glucose, which is sent to the fermentation stage.

Glucose fermentation. The fermentation is carried out in an agitated jacketed fermenter, fed with glucose, CSL and sodium carbonate. The fermentation broth is sent to an ultrafiltration step to remove cell debris, concentrated in an evaporator, and then to an extraction column to extract the lactic acid (LA) in an organic phase, which is routed to a distillation column to separate the extractant solvent from the LA. The LA-rich stream is then back-extracted with hot water in an extractor train, generating a LA-lean organic phase, which is recycled to the first extraction stage, and an aqueous phase rich in LA that is concentrated in an evaporator and sent to the polymerization stage.

Lactic acid polymerization. The concentrated LA stream is fed to a prepolymer reactor, where it forms low-molecular-weight PLA and water, which is removed and disposed. The low-molecular-weight PLA is sent to the depolymerizer and broken into lactide molecules (the cyclic lactone di-ester derived from lactic acid), which are purified in a drying column and in a meso-lactide removal column. Lactide is fed to a polymerization reactor, forming PLA, which is sent to a devolatilizer to remove unreacted lactide. The PLA is routed to an extrusion step and then packed in bags for storage.

Editor’s note: Content for this column was originally developed by Intratec Solutions LLC (Houston; www.intratec.us) and is edited by Chemical Engineering. The analyses presented are based on publicly available and non-confidential information. The content represents the opinions of Intratec only. More information about the methodology for preparing the analyses can be found, along with terms of use, at www.intratec.us/che.

Related Content
Technology Profile: Suspension Polymerization of Polyvinyl Chloride
This column is based on “Polyvinyl Chloride Production from VCM (Suspension Polymerization) – Cost Analysis,” a report published by Intratec.…
SABIC and Plastic Energy to begin construction on plastic recycling facility in the Netherlands
In a development toward a circular economy for plastics, SABIC (Jubail, Saudi Arabia; www.sabic.com) and Plastic Energy Ltd. (London, U.K.;…
Bio-based Processing Best Practices
Development of robust bio-based processes will be key to accelerating the transition to a circular economy, and there are many…
Royal DSM and Neste enter partnership for bio-based, high-performance polymers
Royal DSM (Herleen, the Netherlands; www.dsm.com), a global science-based company in nutrition, health and sustainable living, today announced that it…
LG Chem develops new, mechanically robust biodegradable material
LG Chem Ltd. (Seoul, South Korea) announced that it has successfully developed a new biodegradable material that could realize mechanical…