As new regulations take effect, familiar refrigerants are being phased out and a variety of next-generation materials and processes are being introduced

Agreed upon in October 2016 after negotiations from over 170 nations, the Kigali Amendment to the Montreal Protocol seeks to phase out the use of hydrofluorocarbon (HFC) refrigerants due to their high global-warming potential (GWP), paving the way for newer, low-GWP refrigerant materials to enter the marketplace. Although the Kigali Amendment is certainly the most prominent refrigerant-related ruling in recent years, several other regulations focused on reducing the use of high-GWP chemical refrigerants have been implemented, including major delistings of HFCs in Europe, the U.S. and Japan. This article provides perspective on low-GWP refrigerants and some attendant operational considerations, and also highlights two refrigerant-free cooling technologies.

Although the Kigali Amendment was not finalized until late last year, the industry has been preparing for an eventual phasedown of HFCs for many years. Manufacturing capacity for low-GWP hydrofluoroolefin (HFO) refrigerants is set to ramp up significantly in the coming years, thanks to investments from companies like Honeywell (Morris Plains, N.J.; www.honeywell.com) and The Chemours Co. (Wilmington, Del.; www.chemours.com).

“Honeywell anticipated the need for next-generation replacements to HFCs more than a decade ago, and has invested $900 million in R&D and new capacity to produce HFC alternatives,” says Rajiv Banavali, vice president and chief technology officer for Honeywell Advanced Materials. The company is nearing startup of what is said to be the world’s largest manufacturing site for next-generation mobile air-conditioning refrigerants in Geismar, La.

“There are multiple factors involved in phasing down a generation of substances like HFCs,” says Banavali, including costs, the availability of replacement substances, the resources required to produce replacements and the readiness of current applications to accept replacements without significant retrofitting. To make the transition to new refrigerants as seamless as possible, HFO producers strive to make their products “drop-in” replacements for legacy refrigerants, and Honeywell’s Solstice suite of HFO-based products has been reviewed by several regulatory and industrial organizations for use in the intended applications. Low- and medium-pressure chillers are an area where Solstice products have been especially adaptable, as 15 chiller manufacturers have launched models based on Solstice refrigerants, says Banavali. Increased energy efficiency is also possible with HFOs in some applications, he explains, describing medium-temperature supermarket refrigerant applications as an area where HFO blends have demonstrated as much as 16% lower energy consumption when compared with previous refrigerants. 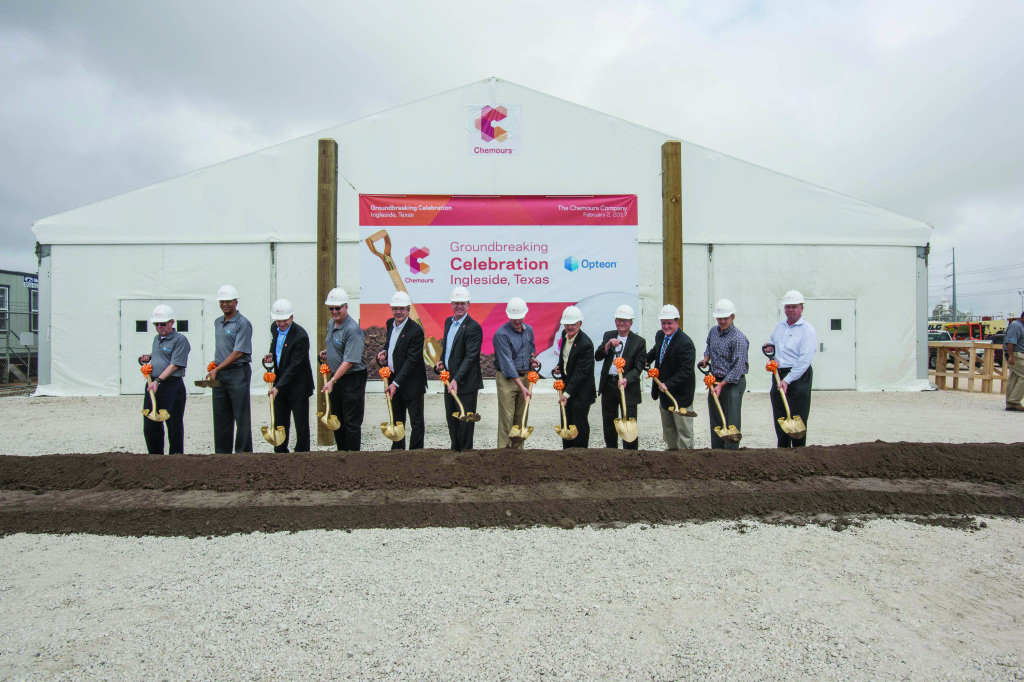 Chemours was the first supplier to commercially produce HFO-1234yf, initially starting in 2011 from a facility in Japan. Since then, the industry has seen the introduction of numerous environmental regulations, making investments in low-GWP solutions all the more crucial. Chemours’ Opteon low-GWP product line was initially driven by mobile air-conditioning applications, but has seen an increase in more complex applications on the horizon. “Chemours is actively developing several new refrigerant fluids based on HFO-1336mzz technology for a variety of applications, including traditional chiller systems and the emerging arena of waste-heat recovery, such as high-temperature heat pumps and organic Rankine cycles,” comments Boeri.

In India, SRF Ltd. (Gurgaon, India; www.srf.com) is constructing a pilot plant to demonstrate a new HFO-1234yf manufacturing process. “SRF is one of the very few companies to develop its own technology for manufacturing HFO-1234yf,” says Prashant Yadav, president and CEO of SRF’s Fluorochemicals & Engineering Plastics business. Based on market needs in India, SRF will progress to commercial-scale manufacturing, mentions Yadav, citing rising car production as an accelerator for refrigerant demand. “SRF is preparing to meet this expected rise in demand in the future with next-generation low-GWP refrigerants,” he says.

As industries begin implementing new refrigerants, additional operational considerations must be reviewed, including compatibility with lubricating oils and other auxiliary chemicals. A group from JX Nippon Oil & Energy Corp. (NOE; Tokyo; www.noe.jx-group.co.jp) is developing polyol ester (POE) refrigerant oils specifically for use with HFO refrigerants. “Refrigeration oils are generally required to have good miscibility with the refrigerant, good lubricity and chemical stability under the refrigerant atmospheres. In the case of HFO refrigerants, the chemical stability could be a problem,” says Akira Tada, an engineer with NOE’s Grease & Refrigeration Oil R&D Group. Tada cites HFOs’ double bonds as the source of these instability concerns, as they increase the refrigerants’ likelihood of decomposition when compared to HFCs. “If air gets into refrigeration systems using HFOs, the decomposition of HFOs proceeds drastically, and it leads to the formation of hydrogen fluoride,” he explains. The presence of hydrogen fluoride not only accelerates the degradation of refrigeration oils, it also can attack the system’s materials of construction, resulting in serious operational problems. It is these concerns driving NOE’s development of new refrigeration oils for use with HFOs.

New additive formulations have given way to POE oils that have shown high chemical stability under HFO atmospheres, even when contaminated by air. Furthermore, low miscibility of oils with refrigerants can generally lead to separation at low temperatures, which can cause congestion of oil in capillaries and decrease the amount of oil in the compressor. However, these new oils exhibit good miscibility and lubricity with HFOs, and are also compatible with HFCs and HFC-HFO mixtures. Tada’s team is currently conducting trials of these oils with clients to evaluate for commercial use.

Potential compatibility problems can be introduced long before systems are running — for instance, the chemistry of metalworking fluids (MWFs) used in fabricating refrigeration equipment can negatively impact operations. Residual MWFs may become mixed into refrigerant and compressor lubricants, causing inefficiencies and premature failures. A team of engineers from Chemtool Inc. (Rockton, Ill.; www.chemtool.com) and CPI Fluid Engineering (Midland, Mich.; www.cpieng.com) has been studying the effects of MWFs on refrigeration systems. “Each MWF and metal-cleaning solution should be evaluated before doing any refrigeration machining, parts washing or even applying metal protective film during manufacture and assembly,” explains Richard Butler, Chemtool fluids technical manager. The researchers’ findings indicated that some MWFs, such as those containing chlorinated alkanes, could still cause corrosion even after parts are washed, leading the team to recommend the use of functional alternatives. The effects of MWF-derived corrosion in refrigeration processes can be severe, describes Butler: “Increased acid number will cause oxidation and degradation of the compressor lubricant. Similarly, corrosion of ferrous materials will produce abrasive particles, leading to premature compressor failure.” For common refrigerants, like R134a and R410A, compatible MWFs and lube oils do exist, says Butler. However, further work remains in the area of next-generation refrigerants. The team’s next project will include compatibility tests for the low-GWP refrigerant HFO-1234yf, as well as an expansion to evaluate more metals, including aluminum and copper.

Beyond the compression cycle 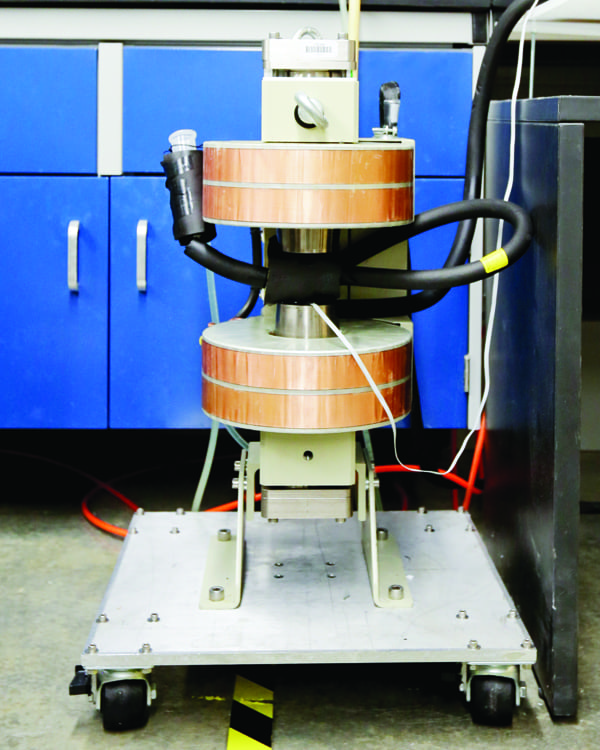 FIGURE 2. The magnetocaloric refrigeration system being developed at ORNL uses a magnetic field to remove heat

Beyond manipulating the magnetocaloric materials to improve their cooling behavior, a second facet of the research is to design the refrigeration machine itself (Figure 2). Inside the refrigeration process, the magnetocaloric materials are periodically magnetized and de-magnetized while a working fluid, such as water or glycol or a mixture of the two, moves into and out of the system. As the fluid passes through the particulate materials, on one side, a cooling effect is generated, while the other side generates a heating effect. Analogous to a vapor-compression refrigeration cycle, here, the cool side acts as the evaporator and the hot side acts as the condenser.

“One of the main challenges, from a performance point of view, is the pressure drop,” says Momen. Other design challenges he mentions are the complex valving system required for the process and optimizing the design to bring down system costs. “It is iterative research that we are performing right now,” he explains. The system’s overall safety is another advantage, since the magnets are shielded, making exposure to the magnetic field unlikely. Also, the use of the innocuous working fluids and solid magnetocaloric “refrigerants” decreases leakage concerns. Additionally, the magnets and the refrigerant materials can be recycled when their service life is up, adds Momen. “The target is to make the system as robust as a conventional refrigerator with a lifetime of around ten to fifteen years,” he explains. In addition to investigating magnetocaloric cooling for refrigerator applications, the ORNL team is also looking into scaling the system into a small air-conditioning unit. 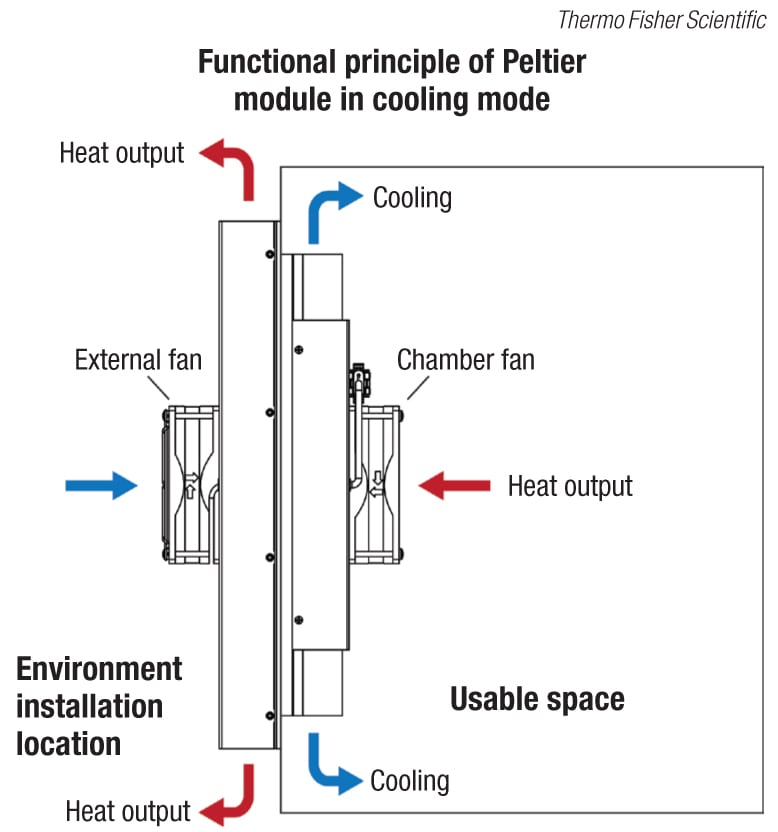 FIGURE 3. Based on Peltier thermoelectric technology, this refrigerated incubator consumes much less energy than a traditional compressor-based cooling system

Thermoelectric devices — those that leverage the heat flux between two materials of differing conductivity and require no refrigerant chemicals — are also being increasingly considered for cooling applications. A new refrigerated incubation system from Thermo Fisher Scientific Inc. (Waltham, Mass.; www.thermofisher.com) is based on the thermoelectric Peltier effect, providing both cooling and heating in a single module. The company developed the Peltier-based Heratherm incubator (Figure 3) in order to overcome some of the disadvantages of traditional compressor-based cooling processes used in similar products, explains Konrad Knauss, global product manager of Thermo Fisher’s constant temperature products. Compressor-based systems are especially energy consuming when systems must regulate temperatures near ambient, because both the compressor and heating element run simultaneously to stabilize temperature. In tests conducted by Thermo Fisher, the Peltier units consumed a fifth of the energy required for running a compressor-based cooling system.

Within the Peltier element, the connection between two metals with different electric conductivities promotes heating on one side and cooling on the other side. “In the refrigerated incubator, we switch the sides when we need cooling or heating — the cool side is on the inside, and the hot side is on the outside, and vice versa,” explains Knauss. While the Peltier effect is extremely efficient in the near-ambient range, there are efficiency disadvantages when operating at extremely high or low temperatures, says Knauss.

Although Peltier cooling systems are available commercially for small-scale applications like household wine coolers, Knauss says refrigerated incubation is the first commercial application of the technology in the industrial science sector. Peltier Heratherm incubators are currently available in a 178-L benchtop model and a 381-L floor model, but with the addition of more internal Peltier elements, the system could effectively be expanded for higher capacities. According to Knauss, the company plans to eventually scale up the system for a larger offering, but there are several challenges to overcome with regard to cost and ease of operation. ■

Driving environmental progress
The recent decision by the U.S. Supreme Court limiting the authority of the U.S. Environmental Protection Agency (EPA) to regulate…
Smart monitoring of oil concentration in the refrigerant circuit
LiquiSonic OCR (photo) provides precise real-time readings — without sampling — of oil concentrations in refrigeration lines. The determination of…
Valves: Emissions Standards and Current Practices
New industry standards aimed at reducing fugitive emissions have necessitated updates to valve-testing procedures and a renewed focus on high-performance…
Airgas to sell refrigerants business for $220 million
Airgas (Radnor, Pa.; www.airgas.com), an Air Liquide company, announced that it has signed an agreement with Hudson Technologies, Inc. to…
PFA resins with numerous processing options
Fluon perfluoroalkoxy (PFA) resins can be used over a wide range of temperatures (–200 to 260°C) and exhibit resistance to…