Controlling the temperature of a process using a thermal loop is important in many applications. The importance of a power controller is discussed here

FIGURE 1. A variety of temperature limit controllers are shown here 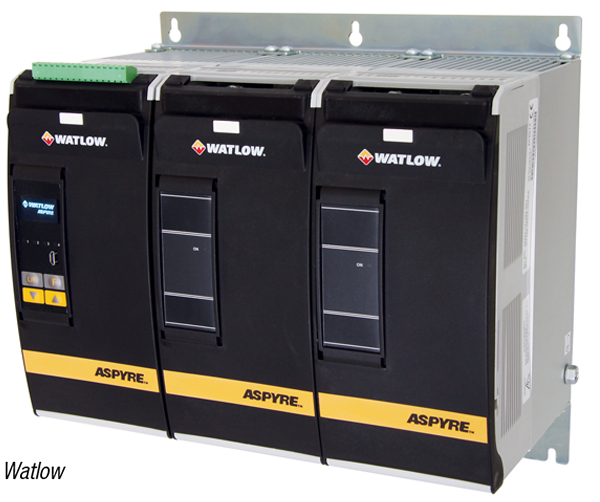 The next question becomes, “Is there a way to make a thermal-loop control process even more robust and effective?” There certainly is — by adding a feedback function through the power controller.

When a temperature controller is informed of the anomaly in the process temperature, it tells the power controller when and how to act in order to normalize it. By its very nature, the controller allows processes to continue running without getting too hot or too cold. This, in and of itself, is a valuable tool. If a process is allowed to continue running at a temperature that is too hot, one risks burning equipment out too quickly or producing an end product that does not meet the requirements set forth. Similarly, if a process is running too cold, the same results could occur depending on the level of tolerance allowed. The mere fact that this is a working model for temperature detection and regulation is positive, but as is often the case, the devil is in the details.

To illustrate this scenario further, consider the nature of the temperature controller. The functionality of that piece of equipment is to control resistive elements. Often, the objective is to control an entire bank of resistive elements. Let us work from a hypothetical scenario. In this scenario, an operator is trying to control a 10-in. flange heater with 36 elements on it. These elements are wired into three circuits containing 12 elements each. Now, imagine that one of these elements burns out. And then, shortly thereafter, another element pops. As a thermocouple is monitoring the temperature of a process, let us say that it reads through its sensors that the temperature is not up to the required level and must add heat to the process accordingly. Now, let us say that typically the heater can do the heating job for this particular process by operating at 80%. Due to the missing elements, it may now need to operate at 90%. In this case, the temperature controller will adequately compensate for heat loss due to the failing elements. However, there is lag inherent to this process. By the time the temperature is recognized as not being up to the requirement, there may be some product that makes its way through that is not heated adequately. The adjustment will be made eventually so there is not necessarily a colossal problem. However, there is more to this situation than meets the eye.

If there is no feedback in this scenario, the operator has no idea that the heater has lost elements and is now working harder to do the job it was designed to do. Why is this so important? If this is happening, it may be time to prepare for the eventual failure of that heater and get the next one lined up and ready to go. As those in the field can attest, a process heater, depending on availability, can take up to 12 weeks (if not longer) to arrive. Thus, if you know elements are popping, you now have a warning that there are issues with this heater, and you can save yourself the crisis of your critical process shutting down because there is no spare on hand. The amount of revenue that can be lost due to this downtime has decision-makers looking for solutions.

In a standard thermal loop, the only way that the temperature controller would know that elements were lost would be that the process is a bit cooler. It then recognizes that it needs to react to the process being cooler. However, due to the nature of this action, there is an inevitable lag in time, which may result in increased scrap or reduced throughput (whatever is impacted by the process not being quite up to temperature). The power controller solves this problem. As a temperature controller can only react once it realizes the process is cooler than it should be, the power controller, alternatively, notices that the heater is drawing less ohms than usual. Next, additional power can be sufficiently rerouted, so the correct number of ohms is being drawn. Then, through ethernet or a supervisory control and data acquisition (SCADA) system, the loss of elements is communicated effectively to the operator. This proactive approach directly impacts a plant’s bottom line in terms of revenue lost otherwise.

The benefits of implementing a power controller to a process cannot be understated. In practice, there are not many petroleum refineries that have a spare heater sitting on a shelf, waiting to be swapped into a process when the current heater fails. This is very understandable, as some of these heaters can cost in excess of $50,000. Furthermore, without regular monitoring, there is not a general rule to go by in terms of anticipating when a heater may fail. Thus, it is not always fiscally responsible to have such an expensive piece of equipment lying around when the current piece may last for another 10 years or so.

By receiving that precise feedback made possible by the power controller, operators can anticipate far more accurately when a heater may be on its last leg and the investment in a new piece of equipment is both justifiable and required in the immediate future. Then, when the new one is swapped it, the old failing heater can be refurbished.

Another key benefit to the introduction of SCADA-integrated power controllers is the ability to further an automation effort. As decision-makers continue to automate as many functions as possible and scale as many processes as they can, power controllers allow operators to be less susceptible to human error.

These types of power controllers are being introduced into processes in field at an increasing rate. The type of feedback, proactive actions, automation capabilities and ultimate financial benefits that these pieces of equipment can facilitate has decision-makers looking into how they can be integrated into their process.

Nathan Ehresman is the business unit director for Valin Corp. (5225 Hellyer Ave. #250, San Jose, CA 95138; Phone: 800-774-5630; Email: nehresman@valin.com). He has worked in industrial process heating for more than 20 years and has managed engineering, fabrication, sales and customer service teams. He also hosts a series of videos on Valin Corp.’s YouTube channel in which he discusses various topics in the process control industry. Ehresman has a B.A. from the University of Minnesota, an M.B.A. from Seattle City University and an M.S. in industrial distribution from Texas A&M University.