Perfluorinated ion-exchange membranes are developing beyond legacy applications to find use in a wide variety of emerging markets, including renewable energy

Ion-exchange membranes are used in numerous industrial processes, including seawater desalination, electrodialysis and the production of commodity chemicals via chlor-alkali processes. A membrane’s materials of construction play an extremely important role in its performance in a given application. For example, ion-exchange membranes based on perfluorinated sulfonic acid (PFSA) polymer show high performance under severe operating conditions. These membranes are available in various grades differing in ion-exchange capacity (IEC) and membrane thickness in order to help end users choose a suitable membrane for their application. Such membranes were originally developed for use in the chlor-alkali industry, but are now used in many kinds of industrial electrolysis applications, such as hydrochloric acid electrolysis and organic-salt electrolysis, and in various electrochemical devices, such as fuel cells and water electrolyzers. In addition, next-generation membranes designed for polymer electrolyte membrane (PEM) water electrolysis are being developed to achieve low membrane resistance, leading to reduced power consumption and lower emissions. In recent years, electrolytic processes and electrochemical devices utilizing separation technology with ion-exchange membranes have been attracting attention in various fields, including renewable energy.

Currently, most PFSA polymer is used in salt form for ion-exchange membranes, which are employed as separators in chlor-alkali cells around the world, where electrolysis splits brine into chlorine and caustic soda accompanied by hydrogen. These basic chemicals are necessary in various industries, including chemicals, textiles, paper and metalworking. Prior to the introduction of membrane-cell electrolysis technology, either asbestos diaphragm-cell or mercury-cell technology had been used in chlor-alkali processes. Environmental issues concerning the use of asbestos and mercury required the development of a safer alternative approach. Although PFSA polymer has excellent chemical stability in the harsh oxidative and alkaline conditions found in chlor-alkali cells, membranes composed of only PFSA polymer lacked the ability to prevent back-migration of hydroxide ions through the membranes, resulting in low current efficiency.

In the 1970s, membranes based on perfluorocarboxylate polymer were developed to reduce this back-migration. The carboxylate polymer enabled membrane-cell electrolysis to be used in the chlor-alkali industry. Through continuous technological advancements, the latest ion-exchange membranes include both perfluorocarboxylate polymer and PFSA polymer in salt form. Low cell voltage or energy consumption has been achieved by the further development of PFSA polymer and other technologies (Figure 1) [1, 2]. Building on the strengths of these established ion-exchange membrane technologies, the industry continues developing new membranes used in a variety of fields. 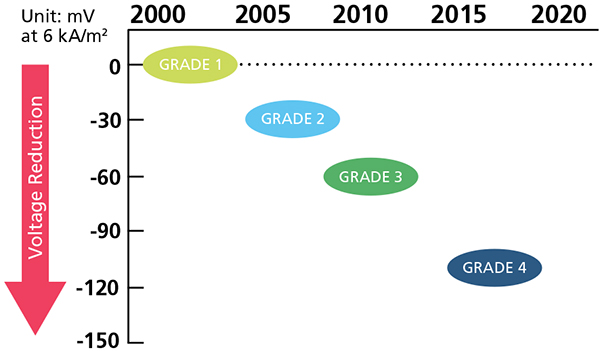 To maintain its mechanical strength and dimensional stability, the chlor-alkali membrane has a mixed woven fabric made of polytetrafluoroethylene (PTFE) yarn and polyethylene terephthalate (PET) yarn. The fabric makes it easy to handle the membrane. After starting the electrolytic operation, dissolution of the PET yarn forms cavities in the membrane, leading to a reduction of the cell voltage. Since chlor-alkali electrolysis generates hydrogen gas and chlorine gas in the system, inorganic particles are coated on the surfaces of the membrane to prevent gas adhesion to the surfaces, resulting in further reduction of the voltage [2]. 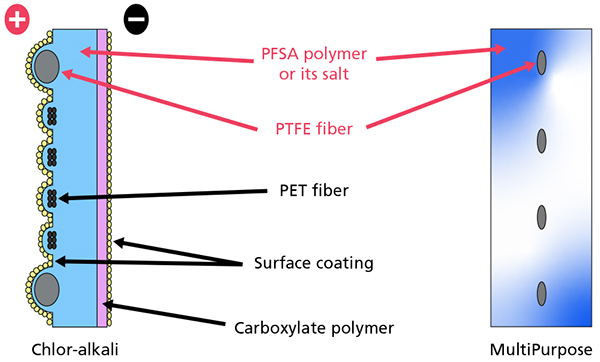 FIGURE 2. The cross-sectional structure of a multipurpose membrane is simpler than membranes used solely for chlor-alkali applications

Conversely, when compared to specific chlor-alkali membranes, a multipurpose ion-exchange membrane has a simple structure in which PFSA polymer or its salt is used alone for its ion-exchange polymer layer. PTFE fabric is often used as a reinforcement in the membrane. Such fluoropolymer-based materials give the membrane excellent chemical durability. This carboxylate-free composition allows the membrane to perform well, even in a low-pH environment. Figures 2 and 3 illustrate the differences between multipurpose and chlor-alkali membranes.

Advancing membrane technology enables selection of the optimum membrane according to the user’s application. There are multiple membrane grades, which differ in IEC and in membrane thickness. High IEC is achieved by introduction of much of the sulfonic acid moiety to the PFSA polymer, resulting in high water content. High IEC and low membrane thickness decrease electric resistance, while low IEC and high thickness increase ion selectivity.

PFSA membranes are produced via an extrusion process using a heat-melted precursor of PFSA polymer, or through a cast process, evaporating solution or dispersion of PFSA polymer. The extrusion process tends to produce thick membranes, while the cast process tends to produce thin membranes. Due to the advancements in both processes, however, the ranges of achievable membrane thickness for the two methods are overlapping. Note that IEC and optimal membrane thickness will vary depending on the end-use application (Figure 4). Membrane performance is also affected by the reinforcement used in the membrane and by the process conditions used during membrane production. 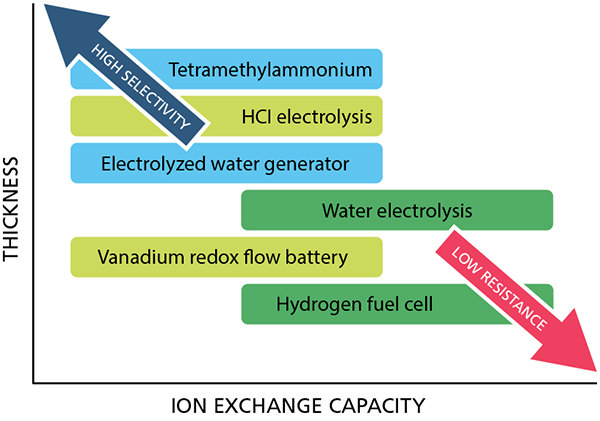 These simply structured membranes are used as separators in chemical plants and electrochemical devices. An example of such a use is the electrolysis of HCl, which provides the chlorine required for some chlorination processes, such as isocyanates production. Another example is the electrolysis of tetraalkylammonium salts to produce their hydroxides, which are used as the developer to form photoresist patterns in semiconductor manufacturing. They are also used as structure directing agents to synthesize zeolite catalysts.

Other membrane applications include fuel cells and water electrolyzers. Fuel cells are electricity generators whose fuels, such as hydrogen gas and methanol, are oxidized electrochemically to supply electricity. Water electrolyzers (Figure 5) can produce hypochlorous acid as a sterilizing agent and sodium hydroxide as a degreasing agent onsite in many applications, including in food-and-beverage plants and medical facilities [3]. 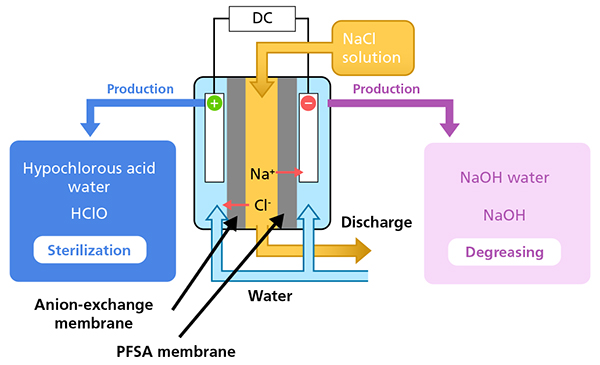 FIGURE 5. A PFSA membrane can be used in a three-chamber electrolyzer for hypochlorous acid and sodium hydroxide

With the increased interest in renewable energy, power-to-gas technology is drawing more attention in recent years. This technology stores renewable energy, such as solar or wind power (which fluctuate depending on the surrounding environment and weather) in the form of hydrogen or hydrogenated compounds. These compounds can work as energy carriers when needed. An option for converting electric power into hydrogen energy is polymer-electrolyte membrane (PEM) water electrolysis (Figure 6). This electrolysis technology has excellent reaction responsiveness, a wide operating range and the ability to generate hydrogen with high purity and high pressure. It is attracting interest from various manufacturers and research institutes. 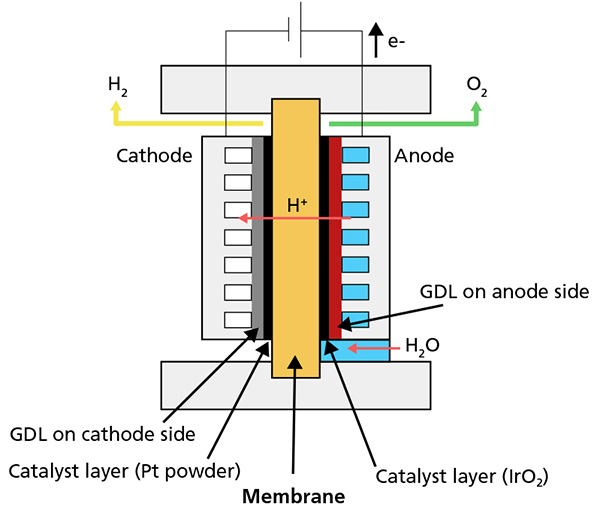 Currently, much work is underway to develop new membrane technologies for PEM water electrolysis, as it is emerging as one of the most industrially significant applications based on ion-exchange membrane technology. In PEM water electrolysis, water is supplied to the anode and is oxidized and separated into O2, protons (H+) and electrons (e–). While O2 is generated on the anode side, the separated proton permeates the ion-exchange membrane and is reduced on the cathode side to generate hydrogen. Thereby, the proton conductivity dictates the energy efficiency of the entire system. In PEM water-electrolysis applications, PFSA ion-exchange membranes can lower electric resistance, save energy and convert renewable energy efficiently. The membrane design requires increasing the IEC and decreasing the thickness. Both the anode side and cathode sides include a gas diffusion layer (GDL), as shown in Figure 6.

While pursuing low electric resistance, other physical properties, such as mechanical strength and dimensional stability between the dry state and wet state, can be in a trade-off relationship. Therefore, the membrane design should involve optimizing the reinforcement and balancing the thickness. This practice has been learned through decades of previous and ongoing experience in the chlor-alkali industry.

Another emerging application area for ion-exchange membranes is in redox flow batteries, which have been attracting attention as large-scale power-storage devices for renewable energy.

Perfluorinated ion-exchange membranes play an essential role in transitioning the industry to more sustainable operations, in this case, utilizing renewable energy instead of fossil fuels, just as they have done in the past by replacing asbestos and mercury in the chlor-alkali industry. ■

Masahiro Ohkura currently is the business development manager of Forblue S-Series membranes in the Forblue Business Division of AGC Inc.’s Chemicals company (Email: masahiro.ohkura@agc.com; Website: www.agc-chemicals.com). Prior to this role, he served in research and development positions with AGC, where he has worked since 2005. He received his master of engineering degree in polymer chemistry and bachelor of engineering degree in industrial chemistry from Kyoto University.

Shintaro Hayabe is a researcher in the Research & Development Division of AGC Inc.’s Chemicals company, where he has worked since 2017. He graduated from Keio University with a master’s degree in engineering. He has been working with ion-exchange membrane-related materials for about four years. His responsibilities include the development of new ion-exchange membrane technologies and the evaluation of their actual performance.

Kosuke Sumikura is the leader of the functional membrane development group in the Research & Development Division of AGC Inc.’s Chemicals company. He has been working on electrochemical and inorganic process development at AGC for ten years. In addition, for the past five years, he has been engaged in ion-exchange membrane development. He earned his M.S. degree from Kobe University, majoring in electrochemistry and inorganic chemistry.