Scrolling or Pushing? Choosing the Right Type of Filtration Centrifuge
Understanding the working principles of scrolling and pushing centrifuges can…
IN THE NEWSNEWSFRONTS

Biodegradable corn-based adhesive is non-toxic, with tunable properties
A new class of adhesives being developed by the startup…

Upcycling of waste ABS into 3D-printable material with enhanced properties
In an advancement toward circularity for commodity plastics, researchers at…

Limpet tooth inspires strongest biomaterial
An interdisciplinary team of biologists, chemists and engineers from the…

Biosynthesis of renewable, high-energy-density, cyclopropane-based fuels
Cyclopropane-functionalized hydrocarbons can be excellent fuels because of their high…
BUSINESS NEWS

ChemChronicles: 'Eye it Before You Buy It,' The Invention of Cellophane
Transparent polymer film started with an accident . . .…
Highlights Drought emphasizes water scarcityCan Trash Interfere With a Cure?Why Innovation Operations are CriticalWeighing and DosingFacts at your Fingertips: Clean-in-Place (CIP) Systems

Chemical process industries (CPI) plants are typically designed to achieve specific production volumes, but as anyone who has worked in one knows, those production targets are prone to change as market factors and plant objectives evolve. Most CPI facilities are expected to increase (or decrease) production targets at some point. An increase in production targets typically involves increasing the operating pressures, temperatures or both, in order to increase the rate of process reaction and the quantity of final product manufactured at the site. 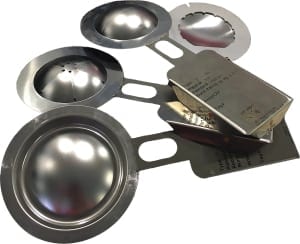 When operating pressures are brought closer to the set pressure of rupture discs and relief valves, these changes can increase the frequency of nuisance failures, which can lead to pressure releases and shutdowns. Fortunately, pressure-relief technology has evolved over time, resulting in greater accuracy and higher performance for today’s advanced rupture disc designs.

Rupture discs are designed to protect vessels and other capital equipment from dangerous and damaging overpressurization, by bursting open and safely relieving the overpressure condition when the line or vessel reaches a pre-determined pressure and temperature. They can provide both primary and secondary relief, and are used in combination with pressure-relief valves to prevent leakage and protect relief-valve seats from potential exposure to corrosive and sticky substances.

The burst pressure is commonly set at or below the maximum allowable working pressure (MAWP) of the vessel and the temperature at which overpressure is expected to occur. In some cases, it may be desirable to set the burst pressure well below the MAWP. An increase in operating pressures means that these devices must withstand pressures closer to the expected burst pressure. Rules governing the use of rupture discs in chemical process plants can be found in ASME BPVCVIII.1-2015, Section VIII [ 1 ]. 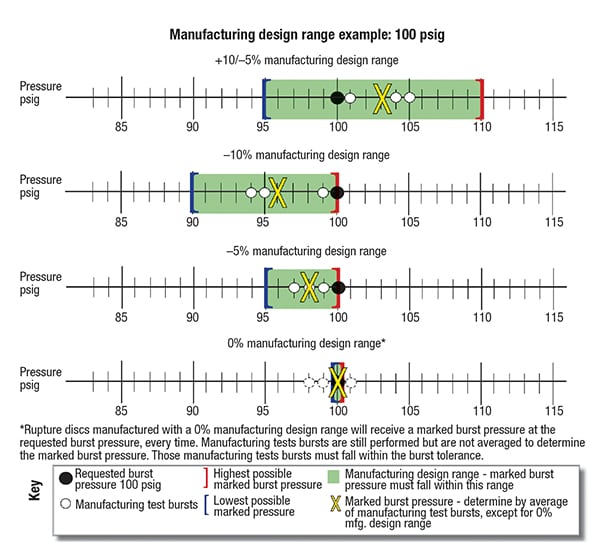 Most rupture discs are manufactured from corrosion-resistant metals, using a design that is specified to meet the burst pressure and performance requirements of a given application. The user must specify the size, type, material, requested burst pressure and temperature.

Rupture discs have evolved considerably since their first use in the 1930s. Nonetheless, most of the older designs are still in use today. Compared to modern designs, older rupture disc designs have lower performance capabilities, reduced repeatability and are more difficult to accurately calibrate to a specific burst pressure.

While they may be less expensive than the newer high-performance designs, they may bring tradeoffs in performance or reliability. In many cases, a facility’s particular management of change (MOC) protocol prevents upgrading to modern technology. When this happens, users often become accustomed to tolerating the poor performance of these outdated designs.

Understanding the terms that are used to describe rupture disc performance, and the technology options that are available to meet the increasing demands placed upon these important safety devices can give engineers the tools needed to support increased production objectives at the chemical process plant. 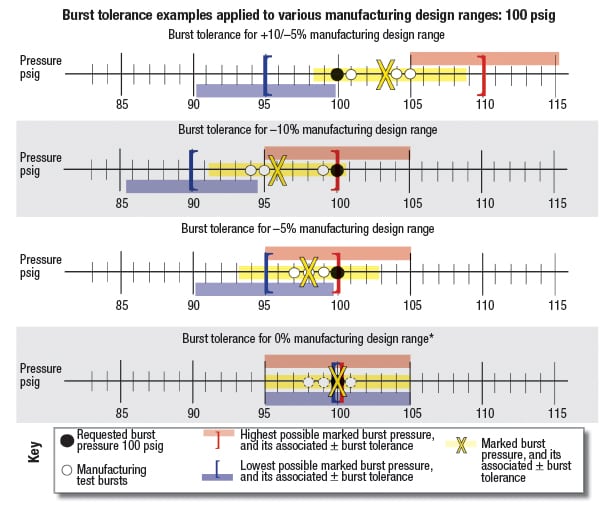 Vacuum resistance. Many processes require rupture discs to operate under vacuum or backpressure. Some rupture discs are manufactured from metal as thin as 0.001 in. thick. Other designs use a polymer membrane to contain the process media and transfer the pressure load to the metal rupture disc components.

When certain types of rupture discs are exposed to vacuum or backpressure, the dome can invert or collapse while still remaining intact. The next pressure cycle will reform the dome in the downstream direction. Repeated forward/reverse cycles may result in holes, cracks and compromised material strength, leading to reduced burst pressure.

Similarly, polymer membranes can burst in the vacuum direction if they are not properly supported. Discs using a polymer membrane, or those manufactured of thin, weak material require the addition of a vacuum support to prevent damage. A vacuum support is an additional component that helps the rupture disc to resist damage by vacuum or backpressure, but opens easily with the rupture disc when the disc is over-pressured in the positive direction.

Composite rupture discs — 1950s design. Composite rupture discs are made of layers of components that serve different functions. The top layer is essentially a pre-bulged metal rupture disc that has a series of holes and slits that are punched or cut with a laser. These holes and slits weaken the disc, and add a means for further adjustment of burst pressure and much lower burst pressures than pre-bulged discs are able to reach. Because this mechanism allows manufacturers to match the requested burst pressure more accurately, this type of disc is usually available with a tighter manufacturing design range.

The middle layer is usually a fluoropolymer seal that is protected from scratches and abrasion by slit fluoropolymer layers. This seal contains the process media and transfers the pressure load to the metal top.

The bottom layer (closest to the process fluid) is usually a metal vacuum support that supports the liner when vacuum is present, but opens easily when the rupture disc bursts. There are other components and configurations available for this family of disc, but this configuration is the most common (Table 5). 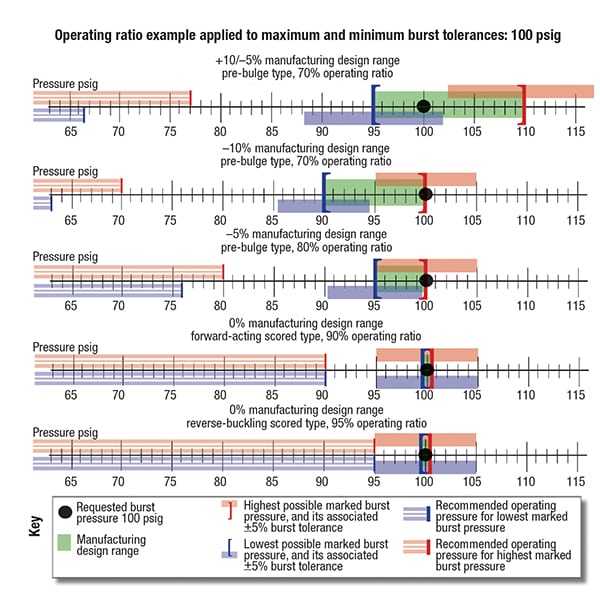 Putting it all together

Premium scored rupture discs can cost more than lower-performance rupture discs, but as Table 8 shows, they can be operated reliably at much higher operating pressures. The increased cost of the rupture disc is often recovered through higher production rates and reduced downtime due to premature failures.

Alan Wilson is senior field engineer for Oseco, a manufacturer of rupture discs and other safety pressure relief devices (1701 W. Tacoma, Broken Arrow, OK 74012; Phone: 918-258-5626; Email: awilson@oseco.com). He holds a B.S. degree in mechanical design technology from Oklahoma State University, and an MBA from Oklahoma City University. Wilson has been with Oseco for 27 years, serving as an engineering expert in research and development, rupture disc analysis and ASME code. Wilson has earned several patents for his contributions to the Oseco portfolio, and sits on two ASME committees. He has helped to design, build and teach training seminar programs for the proper use, installation and specification of rupture discs in onsite learning events for chemical processing plants and others in the field. Wilson was also on the first team to coordinate with television’s Mythbusters program, when they featured Oseco rupture discs in the first of seven episodes, using them to measure explosion intensity.

Note: The discussion provided in this article does not include every rupture disc type and situation, but is representative of most rupture discs used in chemical process industries (CPI) applications. Users should always refer to the data sheets for any specific brand and model for performance specifications.