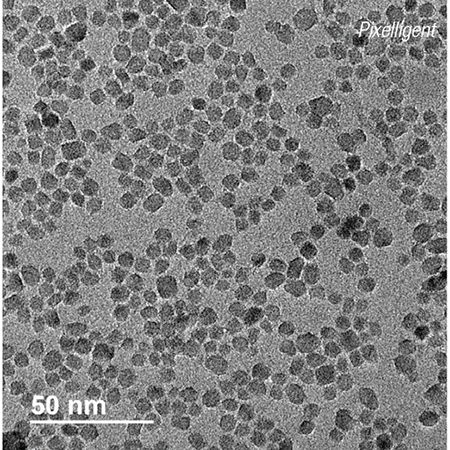 Pixelligent Technologies Inc. (Baltimore, Md.; www.pixelligent.com) has developed a process for making metal-oxide nanocrystaline materials that have found uses as additives in a variety of industrial lubricants, mixed- and augmented-reality (AR/MR) glasses, and various display technologies. The company’s PixClearProcess results in dispersions of zirconium dioxide (ZrO2) or titanium dioxide (TiO2) nanocrystals capped with surface agents. The 5-nm crystals (photo) are grown from the bottom up via a proprietary method. The nanocrystal cores are coupled with functional groups on their surfaces, according to the application. The surface functional groups prevent the particles from aggregating, allowing for uniform dispersions in various media, including oils, solvents and resins.

“The PixClearProcess uses readily available raw materials and widely available equipment customized for Pixelligent to manufacture amounts of advanced nanocomposites in the range of several kilograms to multiple tons,” says Richard Ming, Pixelligent global sales and marketing director. The metal-oxide nanoparticles increase the refractive index (RI) of the resin into which they are added and enable larger fields of view in AR/MR glasses. In display applications, the high-RI resins made by Pixelligent also improve light extraction and lower power consumption, along with allowing greater clarity and better operating efficiency, explains Ming.

For lubricant applications, Pixelligent product development manager Robert Wiacek says that at the nanoscale, the nanocrystals deposit as a 100-nm-thick “tribo-film” on the contact surface of steel equipment parts, which prevents wear on the moving parts. “The additives allow operators to use lower-viscosity oils, which can increase operating efficiency in motors, gearboxes, and other machinery,” says Wiacek. Further, they form the protective film over a wide temperature range, and are transparent to visible light, so they do not change the color or appearance of the base oils themselves, he adds.

Pixelligent recently received a $1.8-million grant from the U.S. Department of Energy’s Advanced Manufacturing Office to further develop the lubricant applications for the metal-oxide nanocrystaline materials, along with researchers at Argonne National Laboratory and the Carpick Research Group at the University of Pennsylvania, as well as well known industrial partners in the oil additives industry, including Lanxess Corp.

Related Content
Advanced facility accelerates commercial development of nanoscale materials
Flame-spray pyrolysis (FSP) is a type of aerosol synthesis in which solid particles condense from the vapor phase after the…
VDMA Fuel Cell working group expands
At the digital general meeting of the VDMA Fuel Cell Working Group, Fabian Kapp, Managing Director of Graebener Maschinentechnik, was…
Grace to acquire Albemarle’s Fine Chemistry business for $570 million
W. R. Grace & Co. (Columbia, Md.) announced that it has entered into a definitive agreement to acquire the Fine…
UOP reforming and aromatics technologies licensed for Hengyi Industries’ petrochemical complex in Brunei
Honeywell announced that Hengyi Industries will use advanced reforming and aromatics technologies from Honeywell UOP (Des Plaines, Ill.) at its…
TPC Group starts up second phase of Port Neches C4 project
TPC Group (Houston) announced the successful startup of the second phase of its terminal operations as part of a three-phased…