Corrosion can be a serious source of valve damage, and it can often result in costly leakage, failures and repairs or replacements. There are many different types of corrosion, and the risks increase under harsh conditions. A variety of protection technologies are available in the form of physical barriers, coatings and corrosion inhibitors. Some of the best options combine physical barriers to the environment with the use of corrosion-inhibitor technologies to protect intricate and recessed areas that are difficult to access. Such inhibitor technologies make corrosion mitigation much more efficient and effective to benefit valve manufacturers and plant operators. When used in conjunction with simple restoration techniques (Figure 1), these methods play an important role in keeping valves corrosion-free. While valves are critical across the chemical process industries (CPI) — and play a role in every industrial plant, for that matter — it is not just during installation and operation that they need to be corrosion-free. While this is vital for good, reliable processes, corrosion protection starts much earlier and is, in effect, important at almost every phase of a valve’s lifecycle. This article explores why corrosion considerations matter and shares practical examples of how the corrosion problem can successfully be remedied for the benefit of all stakeholders involved. 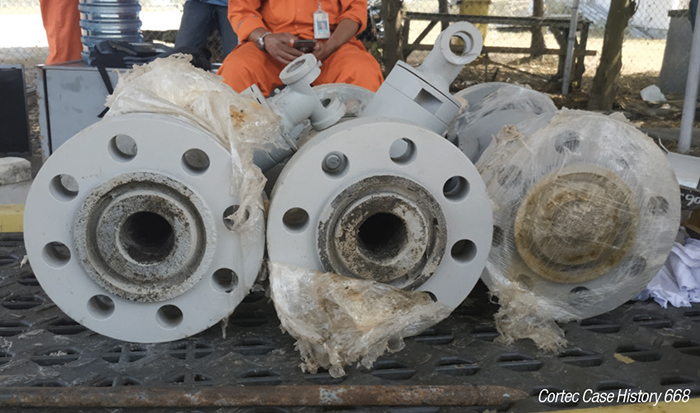 FIGURE 1. Valves are shown before undergoing restoration and preservation activities

Corrosion protection should ideally start at the valve manufacturing plant for the good of both the manufacturer and the recipient. Valve manufacturers face the special challenge of shipping freshly machined valves to the end user in like-new condition. The end user expects to receive them as such, regardless of the climates the valves must travel through to reach the installation site. If the valves arrive rusty, the blame tends to fall on the manufacturer.

Aside from the negative image of receiving a less-than-satisfactory product that is not in peak condition, the end user may legitimately be concerned about installing the parts for fear that rust will cause further problems and potential failure in the future. An expected response would be for the end user to complain and demand rework, replacement or refund. Even if the manufacturer comes through successfully, it would have been much easier to avoid corrosion in the first place rather than suffer the loss of time, money and customer trust that followed.

One of the challenges for doing so is that valve manufacturers often have to battle with a variety of different conditions, including some that are potentially severe, depending on their manufacturing environment and path of export. The particulars of the export route or climate may not even be known very far in advance. However, a general knowledge of the potential exposures can be helpful in executing a preemptive corrosion protection plan to avoid problems down the road.

Manufacturers located in hot, humid environments probably already know from experience that their goods are especially susceptible to corrosion-related damage. Often, manufacturing facilities or warehouses are not air-conditioned, and these hot, humid environments can wreak havoc in the form of flash rust that blossoms on freshly machined surfaces as the valves await shipment or the next step in the manufacturing process.

Once in shipment, whether by land or by sea, the valves face another challenging time when they are at heightened risk for corrosion from fluctuating temperatures, condensation and possibly even exposure to high-chloride-content sea spray. The longer the valve has to remain in these conditions, the worse the results can be. Manufacturers must therefore consider the potential situation and take appropriate precautions to avoid spoiled goods.

Another time that valves face a special risk of corrosion is when they arrive onsite at a new facility under construction. This process of construction and gradual startup can take years, during which time, custom and standard equipment and components are delivered. Chances are high that many of the pieces will be stored on the grounds until all components arrive and construction and installation can be completed. To avoid possible rusting problems during storage, precautions can be taken by the supplier, or by the user onsite (Figure 2). 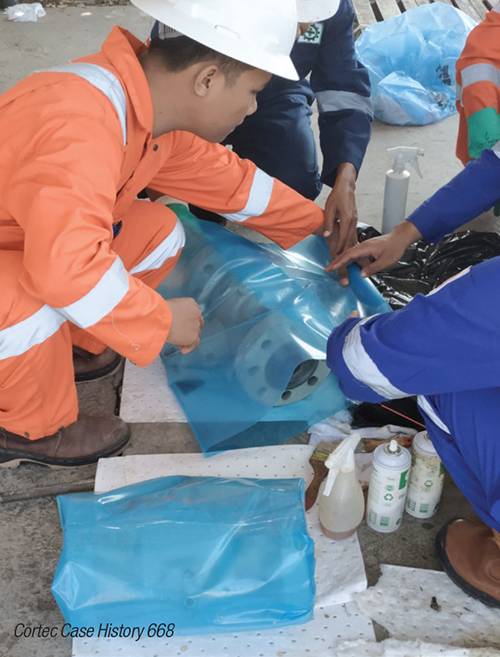 Even after a plant is up and running, a similar rust-prevention responsibility falls on the facility. Best practices call for making sure that critical spares are always on hand to replace a failed component quickly with as little downtime as possible (Figure 3). If the spare valves in storage have rusted, this process will be interrupted, whether from simply having to restore the valve or not being able to restore it at all. Depending on the criticality of the valve, this could have an impact on valve safety in addition to repair expenses and losses from stalled production — a price tag that can quickly add up, especially at chemical processing facilities. If valves are properly restored and preserved ahead of time, the facility can quickly get back to service using these emergency backups that are rust-free and ready to use. 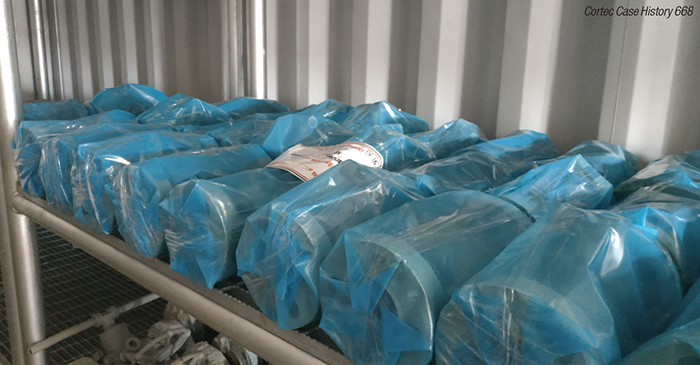 FIGURE 3. Spare valves should be neatly restored and preserved for future use while in storage so that they are ready to go when needed

The decision to shut down a plant is often combined with plans to preserve valuable assets until the time that the facility can be reopened or the assets sold. If the valves are allowed to rust, either in place or in storage, there could be serious repercussions. The equipment may not work when it is put back into operation, or there may be a sudden failure down the road. Here, the basic goal is the same as with spares in storage — to preserve pieces in good working order to avoid loss of value.

There are two key aspects to making sure that valves are corrosion-free and ready to go. The first is restoration for valves that have already rusted during the manufacturing, shipping or storage phase. The second is preservation of valves that have either been restored or have not yet rusted. Manufacturers will also likely deal with hydrostatic testing in the preservation process.

Restoration. There are different ways to remove existing rust on valves. A common method is abrasive blasting or grinding, which could be especially challenging on intricate valve internals. Another option is to use water-based or even bio-based rust-remover concentrates or gel. These can be applied by dipping the valve into the liquid or brushing on the gel, leaving it to sit for 20 minutes to an hour (or even overnight, depending on the severity of the rust), then neutralizing and rinsing it with an alkaline cleaner that contains flash-corrosion inhibitors (Figure 4). Once the valve is restored, it can be preserved or installed as needed.

FIGURE 4. Cleaning is an important step in protecting valves against corrosion

Preservation. Leakage is one of the first preservation concerns that valve manufacturers often need to address. Hydrostatic testing is used to check for leaks. While this procedure introduces moisture to the valve, which can heighten corrosion risks, appropriate corrosion-inhibiting additives can be used to prevent this. Since disposal of the hydrotesting water can present challenges when levels of chlorides, sulfates or other chemicals exceed wastewater discharge limits, it is important to evaluate the disposal profile of the hydrotest additive before adoption.

It is also beneficial to choose a hydrotesting additive that can do double duty for ongoing corrosion protection. For instance, some film-forming hydrotest additives leave behind a corrosion-inhibiting film that protects metals through direct contact and also release corrosion-inhibiting vapors (also called vapor corrosion inhibitors, or VCIs), which offer added protection for metals in hard-to-reach spaces inside the intricate valve internals. VCIs offer some advantages when compared to standard methods of corrosion protection, because the protective chemistry is able to diffuse through void spaces and adsorb onto metal surfaces in an invisible protective layer that interrupts the normal corrosion reaction, yet naturally evaporates when the enclosure is breached, so that special removal of the product is often not required.

It is observed that when valves are only treated with “contact” corrosion inhibitors, the intricate and complex geometry inside them is at greater risk for corrosion. In addition to hydrotesting with a VCI additive for up to two years of protection, experts may suggest fogging a waterborne VCI inside the valves and coating the stems and flanges with an unobtrusive water-based coating rust preventative that may not need to be cleaned off. After this, valve flange guards can be added and the entire valve wrapped in VCI film [ 1]. The same basic protective components can be adopted in almost any phase of production, storage and shipment, depending on the specific user needs or preferences. 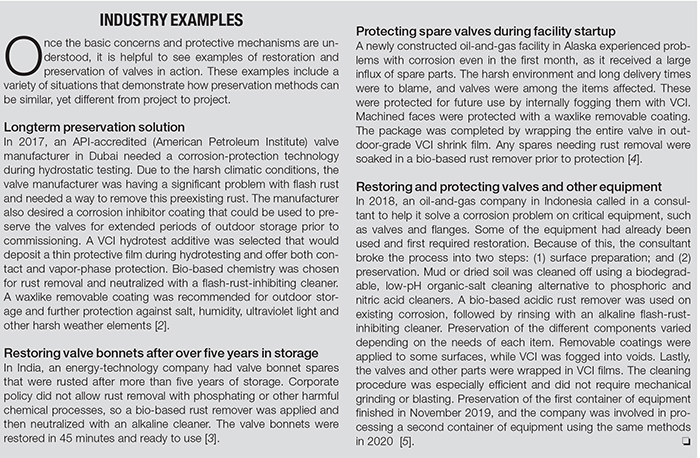 Editor’s Note: All photos were originally contributed to Cortec by distributor PT. Pentra Unggul Sejati. Cortec has permission to use them here.

Ana Juraga (Email: ana.juraga@ecocortec.hr) has been a content writer at Cortec Corp. for 10 years. Besides dealing with media relations, she collaborates with Cortec’s engineers and chemists in creating informative technical content. She is passionate about educating the engineering community about green corrosion-inhibiting technologies and advancements in this field.

Julie Holmquist (Email: jholmquist@cortecvci.com) has been a content writer at Cortec Corp. for more than five years. She specializes in writing about corrosion-inhibiting technology for concrete, electronics, manufacturing, oil and gas, and many other industries. Her articles have been published in dozens of industry magazines.

Related Content
Stainless-steel butterfly valves help streamline material flow
This company’s range of butterfly valves (photo) are offered with a highly polished 316 stainless-steel housing and disc, which make…
Smart monitoring and management of control valves
The web-based Sam Valve Management system (photo) gives users an overview of all connected control valves fitted with smart positioners…
New flange monoblock with shutoff valve
The compact design of this new monoblock with flange connection (photo) integrates a shutoff valve to separate the process from…
A new actuator line for small valves and multitasking
This company has upgraded its range of SSA actuators for small valves by adding new features for more energy-efficient and…
New tank outlet valves for sanitary applications
This company has added a new model of tank outlet valve to its APV D4 series of mix-proof valves (photo).…