Modularization: Managing Project Delivery Risk in the Time of COVID
Taking a modular approach to capital projects offers a pathway…
FACTS AT YOUR FINGERTIPS

Barcode scanner for use in hazardous areas
The IS-TH1 (photo) is said to be the first hand-held…
Highlights Recently Published Books for the CPI: May 2021Facts At Your Fingertips: Evaporator Equipment TypesFocus on Maintenance ToolsImmersive technologies advanceAdvanced Analytics for Process Safety 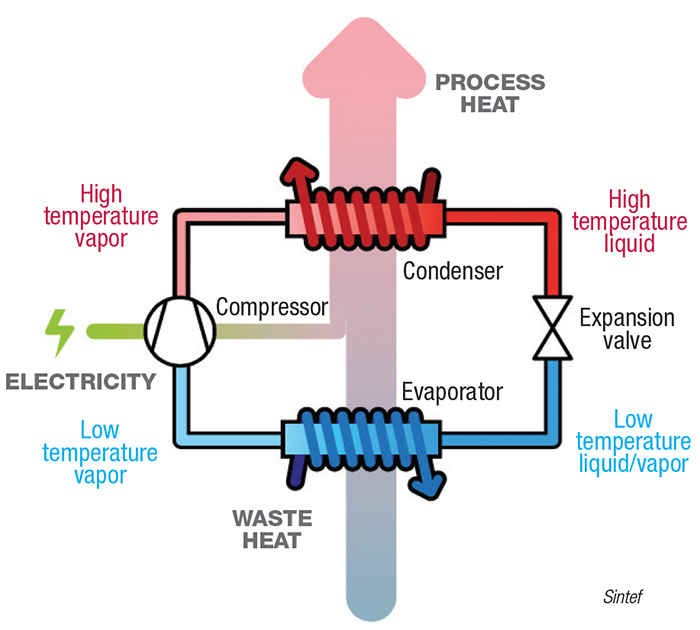 Industrial heat pumps (diagram) are a relatively mature technology that converts low-temperature waste heat into a more usable heat at a higher temperature (above the “pinch point”). However, the technology has been limited to applications of up to 100°C. Now, a new heat pump that can produce process heat at temperatures up to 180°C has been developed in Norwegian project, called Free2Heat — a spinoff generated at the HighEFF Center for Environmentally Friendly Energy Research at Sintef (Trondheim; www.sintef.no). The higher temperature will make the application of heat pumps more useful for producing process heat for the chemical process industries (CPI), as opposed to space heating applications that are commonly used in houses and buildings.

Developed by project partners Sintef, the Norwegian University of Science and Technology (NTNU; Trondheim; www.ntnu.edu) and compressor-manufacturer ToCircle Industries A/S (Oslo; www.tocircle.com), the new heat pump is a concept demonstration of a technology initially developed by the first two partners for processing a dairy product line at TINE (Bergen, Norway). That system, described in a recent issue of Applied Thermal Engineering, used a hybrid absorption-compression heat pump (HACHP) with natural refrigerants to produce process heat at 100°C, which enabled the company to reduce its total energy consumption by up to 50% and become the world’s first zero-emissions dairy.

For the new high-temperature heat pump, water is used as the refrigerant and a rotary vane device, developed by ToCircle, is used as the compressor. The ToCircle compressor uses water as the lubricant, which avoids problems associated with lubricants in the steam system, says Sintef researcher Michael Bantle.

The project, launched in 2019, will continue to 2024. By the end of this year, ToCircle plans to have a 500 kWth compressor commercially available, which can be used for steam-producing heat pumps.