The demonstration plant is located at Aarhus University’s research facility in Foulum, Denmark. The plant will have an annual capacity of 10,0000 L of CO2-neutral methanol from biogas and green power and is scheduled to be fully operational by the beginning of 2022. 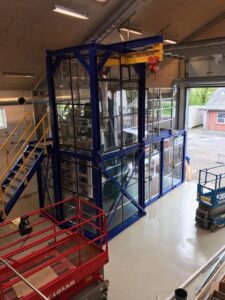 The global annual production of methanol is around 110 million tons. With close to 1.4 ton CO2 being emitted per produced ton methanol, the emission reduction potential – and hereof the positive societal impact – is enormous, assuming all methanol is being produced by means of a carbon neutral process and sustainable feedstock, leaving a significant positive societal impact.

The project is supported by the EUDP Energy Technology Development and Demonstration Program and is developed together with Aarhus University.

The climate benefits from using sustainable Methanol is not limited to one single purpose. Sustainable Methanol can be used for marine fuel, blend in gasoline, and for the chemical industry, where methanol is mainly used today. Further, the main feature in the demonstration plant is Topsoe’s eSMR technology, which enables not only the production of sustainable Methanol, but also other sustainable products like green hydrogen, green ammonia,  eFuels, and more.

The eSMR technology produces synthesis gas (syngas), an essential building block in production of polymers (plastics) and chemicals. The eSMR technology is CO2-neutral when based on biogas as feedstock and green electricity for heating. It even utilizes half the CO2 that makes up about 40% of biogas and typically is costly to separate and vent in production of grid quality biogas. Methanol is used as a clean fuel or an important intermediary in the production of various fuels, chemicals and polymers (plastics).

“Fighting climate change demands clean fuels for all sectors. With this initiative, we will demonstrate that we are able to transform classical production process into a fully carbon-neutral scheme. Specifically, we will demonstrate that sustainable Methanol can be produced from biogas at a very competitive cost compared to other green methanol produced from non-fossil fuels,” says Kim Grøn Knudsen, Chief Strategy and Innovation Officer at Haldor Topsoe.

“We are very happy about the accomplishments in the joint project so far. The new electrified steam methane reforming technology is central in a future based on renewable energy and circular bioeconomy and the eSMR demo plant fits perfectly into our energy research facility in Foulum. We see many interesting perspectives in this new technology, and we look forward to unlock the potential of further development and integration of the technology in the energy system of the future,” says Thomas Lundgaard, project manager at Aarhus University, Dept. of Biological and Chemical Engineering.