Until now, manufacturing polymer-electrolyte membrane fuel cells (PEMFCs) that are small, light and capable of mechanical movement has been challenging using conventional methods. PEMFCs are composed of end plates, bipolar plates, gaskets, membrane-electrode assemblies (MEAs) and other assembly parts, of which the end plates and bipolar plates occupy 80% of the total weight.

Researchers, led by professor Yung-Eun Sung at the Center for Nanoparticle Research within the Institute for Basic Science (IBS; Seoul, South Korea; www.snu.ac.kr) reported the development of a lightweight and flexible, passive air-breathing PEMFC. These new fuel cells, termed tubular PEMFC (t-PEMFC), are not only lightweight and miniaturized, but are also flexible in design. 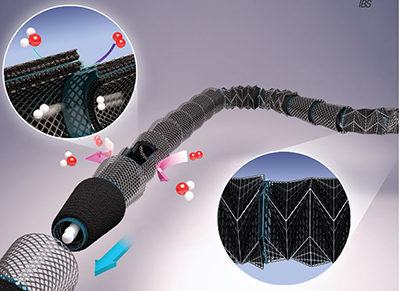 As described in a recent issue of ACS Energy Letters, the basic unit of the t-PEMFC has a conical shape, which allows for simplification of the components and to facilitate easier assembly by allowing the parts to be rolled up and stacked like paper cups (photo). This greatly reduces the number of parts necessary for assembly, such as clamps and bolts, as well as removing the bulky end plates that are used in conventional fuel cells. Because the inside of the tube itself can function as a channel, it also eliminates the need for a flow field plate. In addition, the bipolar plate is lightweight and compact due to being composed of stainless-steel mesh. As a result, the total weight of the parts, excluding the membrane electrode assembly, was reduced to less than 60% of conventional designs. The conical reverse truss design allows the PEMFC to be easily folded and bent using origami principles. The folding reduces the volume by nearly 50%, and 90-deg bending is possible without degradation in performance.

The flexible t-PEMFC may have a wide range of applications in devices that require mechanical movements, such as drones, robots, electrical wires, and small pipelines that require mobility. This technology may also be applied in electrochemical devices based on polymer membrane electrodes, which are used in various processes, including water electrolysis and CO2 conversion.