Focus on Motors and Drives 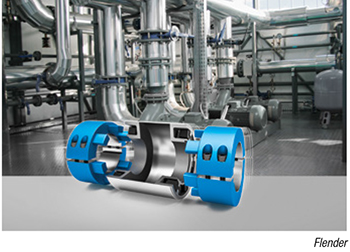 Late last year, this company introduced a new type in its N-Eupex coupling series, while increasing the performance and bore capacity of the entire series. The new double-cardanic N-Eupex DK (photo) connects the shaft ends of the drive and driven machine via two elastomer joints instead of only one joint, as is the case with other coupling types. The introduction of the second elastomer joint increases the damping properties of the coupling and results in a lower torsional stiffness. This reduces vibrations, and the adjacent machine components are less stressed. In addition, the possible radial offset is increased more than fourfold. At the same time, this company increased the performance of the entire N-Eupex series by approximately 30%, and the bore capacity by up to 25%. Users benefit from higher torque, increased rotation speed and a change in size. — Flender GmbH, Bocholt, Germany