Industrial evaporator heat-transfer surfaces are either tubular or flat plates, packaged into a variety of evaporator types, as outlined here.

Batch evaporators are vessels with a heating jacket or internal coil, an overhead condenser, a condensate receiver, and usually, a vacuum source. After feed is charged into the vessel, heat is applied and evaporated vapor is condensed overhead, while the contents of the vessel decrease in volume and increase in concentration of non-volatile materials.

A shell-and-tube heat exchanger is situated inside the evaporator vessel, near the bottom. The heat exchanger, called the calandria, contains an open area at the center, known as the downtake. Process fluid circulates upward through the calandria tubes, against condensing steam on the shell side. The vapor formed travels to the top of the evaporator, where entrained liquid droplets coalesce on a mesh pad and fall back into the boiling liquid. Meanwhile, the liquid emerging from the calandria tubes travels downward through the downtake, then back up through the tubes for a subsequent pass. Circulation occurs by natural convection.

These evaporators operate with a thin film of liquid on the heat-transfer surface. As evaporation takes place, vapor fills the core of the flow channel, which thins and accelerates the film. 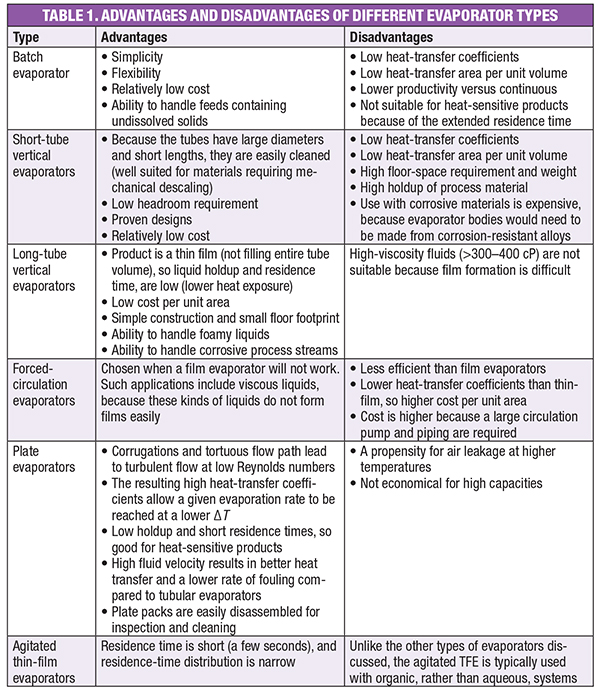 This type has a series of corrugated metal plates, separated by gaskets around the periphery of each plate. The plates are pressed together to form a series of flow channels. Steam and process fluid are directed to alternate channels, and heat is transferred across each plate from the steam side to the process side. Slotted openings and seals direct the various streams. Baffles create a tortuous flow path for the fluid, increasing local velocity, and in turn, heat-transfer efficiency.

These evaporators form films mechanically, using a rotating blade near (or contacting) the heat-transfer surface. The device has a mechanical rotor concentric to a cylindrical, jacketed body. Feed entering the top is distributed evenly by the rotor, then the fluid spirals down the heated wall. Bow waves generated by the rotor blades cause high turbulence, so heat-transfer coefficients are high. Concentrate exits the bottom. Vapor travels from the heated surface to an internal condenser, concentric to the evaporator body, and the resulting condensate (distillate) proceeds downward to exit.

Related Content
Crystallization: Contributing to Circularity
In a variety of industrial applications, crystallization technologies contribute to the circularity of manufacturing processes and supply chains Crystallization is…
Evaporators: Energy Conservation Strategies and Process Control
Several strategies for improving energy consumption and process control in evaporation processes are presented here In industrial evaporation, a heat…
Hybrid wiped-film and fractionation systems
This company’s Hybrid Still technology (photo) is designed to separate extremely heat-sensitive fine chemicals and other substances. These systems combine…
A new generation of laboratory solvent evaporators
This company has launched three new second-generation TurboVap evaporation systems (LV, II and EH) to build upon the foundations of…
Heat Transfer in Wiped Film Evaporators
Simulations demonstrate the complex, changing properties of materials within the evaporator. Such information can help in both designing and selecting…