Facts At Your Fingertips: Adsorption bonding

Physical adsorption phenomena play a critical role in many separation and purification processes, including separations of industrial gases, purification of gases, moisture removal from fluids, water purification and others. Adsorption is a surface phenomenon in which a fluid (gas or liquid) molecule attaches to the surface of a material by physical forces known as Van der Waals interactions. This one-page reference discusses the nature of Van der Waals forces, and their role in adsorption processes, with a focus on London dispersion forces.

Hydrogen bonds. Hydrogen bonds form between H atoms — that acquire significant positive charge from being bound to electronegative elements — and negatively charged lone electron pairs on adjacent molecules. The most important H-bonds form with hydroxide and amide groups. Hydrogen bonds have strengths ranging from 5 to 50 kJ/mol. 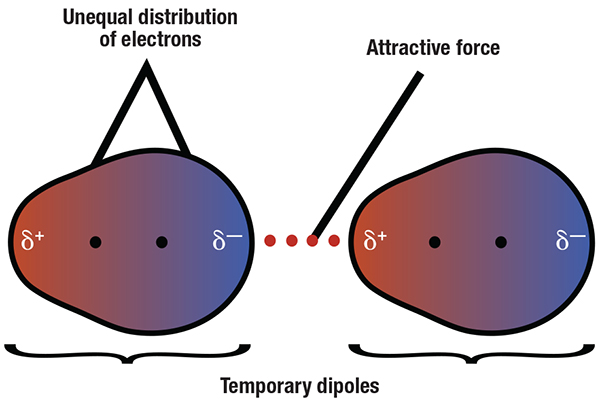 For a neutral molecule or atom, the average charge distribution is zero, but at any given instant, molecules have asymmetric distributions of electron density. Temporarily fluctuating dipole moments can arise from a brief shift of orbital electrons to one side of an atom or molecule. In adsorption, these transient dipoles induce complementary dipoles in neighboring molecules so that adsorbents are attracted to adsorbate molecules and they attach. These temporary induced dipoles are known as London dispersion forces, named for Fritz London, the German physicist and Duke University professor who described the intermolecular forces of noble gas atoms in 1930.

London forces have the following characteristics:

Non-chemical. London forces attract molecules to each other, but do not chemically change the molecules

Nonspecific. London forces are present among all molecules

Temperature-independent. London forces are unaffected by temperature, and thus the adsorption forces will be constant with temperature. Adsorption capacities will still be sensitive to the changes in vapor pressure or solubility of the adsorbing molecules that result from temperature differences

Short-ranged. The magnitude of the London force is sensitive to the proximity of the adsorbate molecules from the adsorbent material. London forces can be considered negligible at separations greater than about two molecular layers. In activated carbon, the adsorption forces are significant if the gaps or voids within the pores of the carbon structure (pore widths) are less than four or five molecular layers.

Bonding energies in adsorption range from about 10 to 70 kJ/mol, much lower than typical covalent bond energies of 200 to 500 kJ/mol. The adsorption bonding energy is high enough for adsorption to occur, yet low enough to allow the adsorbent to be regenerated by removing the adsorbed molecules.

The affinity of a fluid component for a particular adsorbent depends on molecular characteristics, such as size, shape, and polarity of the adsorbent material, as well as the partial pressure or concentration in the fluid, and the system temperature.

Commercial adsorbents are highly porous, with pore surface areas ranging from about 100 to 1,200 m2/g. The large surface area allows a large amount of adsorption relative to the weight of the adsorbent. A number of factors can affect adsorption, such as pore size distribution, molecular size of the impurity species, particle size of the adsorbent, pH of the solution and others. Activated carbon is one of the most complex solid adsorbents, and is very versatile because of its extremely high surface area and micropore volume.

Editor’s note: Information for this column came from several sources, including: Clark, J., Intermolecular Bonding, article in Chemguide (www.chemguide.co.uk) 2017; Desotech, Carbonology articles: What is adsorption?, www.desotech.com, accessed June 2021; and others

New Membranes Support Sustainability Trends
Advances in membrane technologies allow processors to delve into gas- and water-separation applications more effectively and efficiently Conventional membranes have…
This absorbent media can prevent carbon-bed fires
This company has launched Sulphasorb 2 (photo), a new activated alumina and carbon chemical-adsorbent media that reduces the risk of…
Facts At Your Fingertips: Physical Gas-Separation Methods
Industrial gases are critical for a wide range of applications throughout the chemical process industries (CPI). Many of these gases…
Landfill Gas Processing: Plant-Design Considerations
There are several technologies used in the disposal of landfill gas (LFG). Here are some key elements that can guide…
New process efficiently filters hormones from water
Drinking water can be contaminated with micropollutants, including steroid hormones that are used as medical substances and contraceptives. Although their…