Developed two decades ago, Metso Outotec’s (MO; Helsinki, Finland; www.mogroup.com) Circored process is now being reintroduced as a proven way to help decarbonize the ironmaking process. Developed in the 1990s by the former Lurgi Metallurgie (now part of MO) and continually refined, Circored is a hydrogen-based process for the direct reduction of iron-ore fines to produce zero-carbon hot-briquetted iron (HBI) or direct-reduced iron (DRI), which is used in electric-arc furnaces (EAFs) for steelmaking. Circored uses 100% H2 as the reducing agent, which enables low-temperature operation (below 650°C) and avoids sticking problems associated with alternative DRI processes, says Sebastian Lang, director for Modeling & New Business of the Ferrous & Heat Transfer business line at MO. The process also operates at higher pressure (4 bars), which allows a reduction in equipment and piping sizes, thereby lowering capital expenditures (capex), he says. 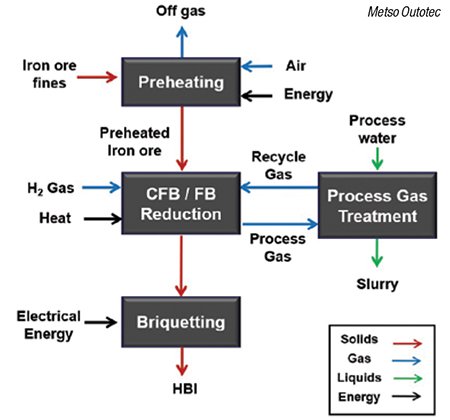 Circored is a two-stage reduction system consisting of a circulating fluidized-bed (CFB) reactor, in which the reaction is controlled by interfacial mass transfer, and a bubbling fluidized-bed (FB) reactor, in which the reduction reaction is diffusion controlled (diagram, right; and flowsheet, below). Ultimately, more than 93% metallization degree is achieved. Circored does not require a pelletizing plant, which is used to prepare iron ore for feeding a blast furnace (to make pig iron) or a shaft furnace (alternate route to DRI/HBI). Also, the metallurgical coke (from coal) used in blast furnaces is eliminated. As a result, CO2 emissions for Circored — operating with H2 produced from conventional steam-methane reforming (SMR) as the H2 source, for example — are about half that generated by traditional blast furnace routes. If “green H2 ” is used as reductant and electric energy for process gas heating — dubbed Circored+ — CO2 emissions are essentially zero. However, the Circored Process is neutral to the origin of H2.

Circored has already been proven at industrial scale, having been used in a demonstration plant in Point Lisas, Trinidad (Chem. Eng., September 1996, p. 25). The plant operated from 1999 to 2005, producing 500,000 ton/yr of HBI. “If you asked me, this plant was erected 20 years too early,” says Lang. “Today, the market drivers have dramatically changed, and direct reduction based on H2 makes more sense than ever before as a solution to decarbonize the steel industry.” 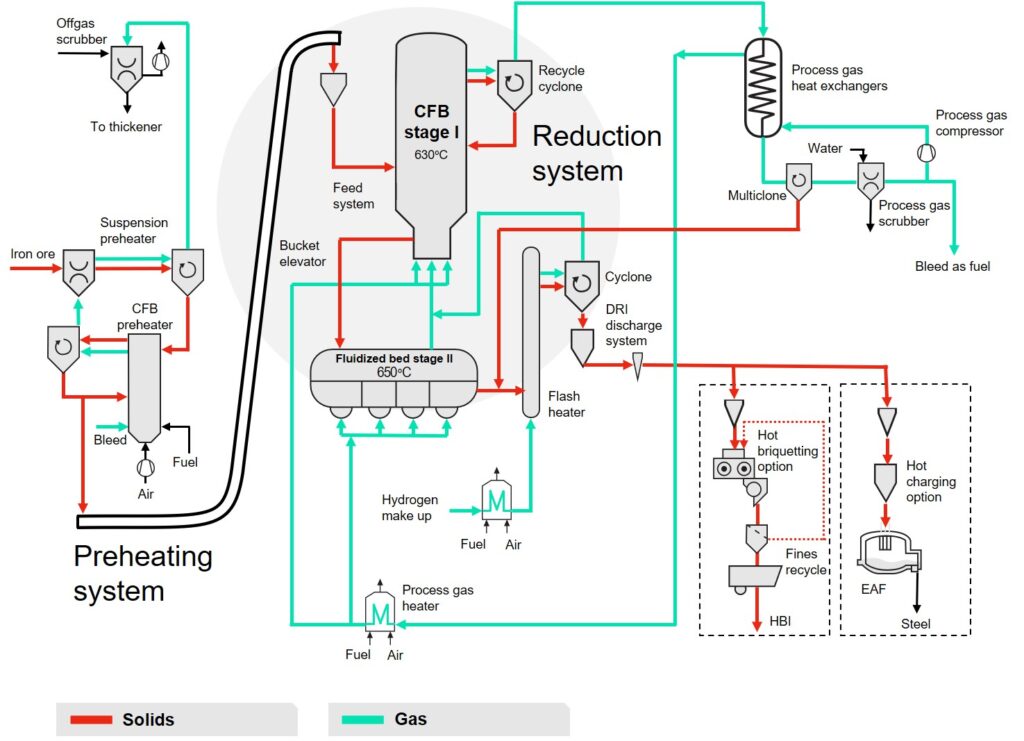