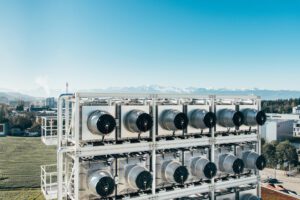 The construction of Orca started in May 2020 and is based on advanced modular technology in the form of stackable, container-sized collector units (photo). This has made it possible for Orca to be operational in under 15 months. Compared to the previous technology generation, the use of steel in the collector units has been reduced by roughly half per output unit. Orca also supports the expansion of Climeworks, as the technology can easily be replicated at different locations worldwide and on ever-larger scales, in a flexible manner wherever ample renewable energy and storage conditions are available, the company says. Strategically located adjacent to ON Power’s Hellisheiði Geothermal Power Plant, Orca runs fully on renewable energy.

Carbfix mixes the air-captured CO2 with water and pumps it deep underground. Because the carbonated water is acidic, it reacts with rock formations to release available cations, such as calcium, magnesium and iron. Over time, these elements combine with the dissolved CO2 and form carbonates that fill up the pores within the rocks. The carbonates are stable for thousands of years and can thus be considered permanently stored. In the CarbFix pilot project that began in 2012, it was determined that at least 95% of the injected CO2 mineralizes within two years, much faster than previously thought. To date, over 70,000 tons of CO2 from industrial sources have been successfully stored at the Carbfix injection site in Hellisheiði.