Buildup of biofouling on membranal surfaces necessitates treatments with corrosive chemicals, such as hydrochloric acid, and even replacement of membrane cartridges, which can be costly in desalination operations. A new coating, developed in the laboratory of Ran Suckevereine at Kinneret Academic College (Gallilee, Israel; www.kinneret.ac.il), is capable of preventing microbial growth on surfaces of commercially available desalination membranes, while maintaining the flowrate and salt rejection observed with the untreated membrane.

The use of coatings to prevent biofouling on membranes has been previously tried, but “coating materials can wash into the treated water if they are not strongly attached,” explains Suckevereine. “Free-radical mechanisms can be used to attach active polymers to the membrane, but without special considerations, the free radicals may damage the membrane.” 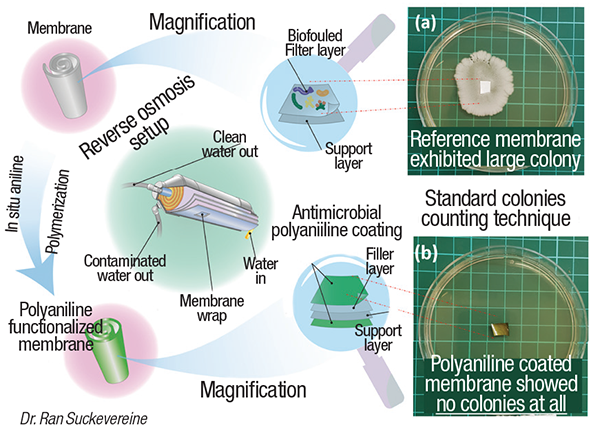 With the small droplets, “there are lots of reaction sites, which increases the rate and yield of the polymerization,” says Suckevereine. Also, the sonication creates free radicals, which allow the binding to the membrane. Since the membrane is present within the inverse emulsion, a thin (~80 nm) layer of polymer forms on the membrane surface.

In tests with E. coli bacteria and water from the Sea of Gallilee, Suckervereine’s group found that the coating prevents microbial growth (photo), and allows the same flowrate and degree of salt rejection as untreated membrane. The team has scaled up the process beyond laboratory scale, but is currently working on another scaleup to a cubic-meter-sized reactor.