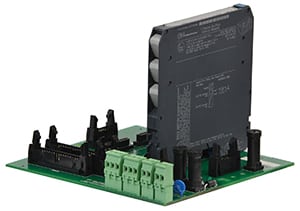 The new HART Multiplexer System (photo) offers the possibility to drastically reduce the number of multiplexer modules, while maintaining the ability to control up to 7,936 channels. Through the integration of multiplexing units in the Termination Board (TB-D5001-HRT), this system needs only one modem to control 256 channels, allowing users to manage up to 7,936 channels utilizing only 31 modules. Compared to the current HART solutions available on the market, which require 496 modules, the HART Multiplexer System greatly reduces the number of required multiplexer modules. The communication speed toward the system has also been greatly improved, reaching 115,200 bits per second (bps), compared to the standard 38,400 bps of conventional systems. The HART System is certified for SIL 3 applications, in compliance with IEC 61508 and IEC 61511 standards. — GM International S.r.l., Villasanta, Italy