Switching from one fluid to another in a heat transfer system requires an engineering evaluation. Here is what to include

In well-designed and well-maintained heat transfer systems, heat transfer fluids generally last for a long time and function as intended. However, there are situations in which it is necessary to change heat transfer fluids. When a switch in fluids is required, facilities in the chemical process industries (CPI) should pay careful attention to a number of important considerations surrounding the properties of the old and new fluids, as well as the design of the heat transfer system. This article provides information about conducting an engineering evaluation to determine how the fluid change will affect safety, environmental concerns, system maintenance and process performance.

Steam is often used for process heating. Primarily, steam transfers heat when it condenses. To transfer heat at high temperature, the steam pressure must be very high. For example, 600-psig steam condenses at approximately 490°F, but many processes require heating to higher temperatures than that. For these applications, a heat transfer fluid can be used. Heat transfer fluids are sometimes referred to as thermal fluids or hot oils.

Some systems are designed to use heat transfer fluid in the vapor phase, but most systems use heat transfer fluid in the liquid phase. A typical liquid-phase heat transfer fluid system, as shown in Figure 1, includes a heater, a pump to circulate fluid through the heater to the process, an expansion tank to accommodate thermal expansion of the fluid, and one or more process heat exchangers. Subloop pumps may be used to circulate fluid through process heat exchangers. Sometimes subloops are operated at a lower temperature than the main circulating loop, and fluid from the main loop is only added as needed to maintain the desired operating temperature. System volume can vary from a few gallons for a pilot-scale system to over 100,000 gallons for a large-system with multiple heaters.

Plant owners with a heat transfer fluid system may decide to switch fluids for several reasons, including the ones listed here:

System-fluid mismatch. The owner has discovered a mismatch between the system design and the current fluid. As an example, the author has seen a system where the selected fluid’s vapor pressure at operating temperature was higher than the pressure rating of the expansion tank and some other components, so fluid was continuously being vented out of the system.

Cost considerations. The owner may be trying to reduce cost. However, the ongoing cost to add fluid to the system must be considered, as well as the initial fill cost. A fluid that is more resistant to thermal degradation will have lower ongoing cost for makeup fluid, and fewer issues with fluid degradation products.

Supplier technical support. The owner may need a more extensive level of technical support from the fluid supplier. The owner can benefit from an experienced fluid supplier with deep knowledge of fluid chemistry who can provide detailed information about why the fluid condition is changing and make practical recommendations about what actions are needed. In the event of fluid contamination, an experienced supplier can evaluate the impact and help the owner determine what actions to take.

The most common high-temperature heat transfer fluids are synthetic organic fluids, mineral oils and silicone-based fluids. Most heat transfer fluids have unique chemistries, so their physical properties are different. Because fluids have different physical properties, it is always appropriate to do an engineering evaluation to determine how the fluid change will affect safety requirements, environmental requirements, operation and maintenance of the system. The engineering evaluation should include all of the factors described below. 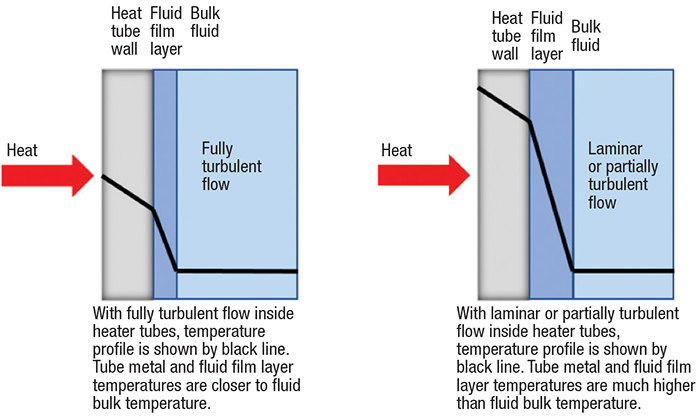 U is the overall heat transfer coefficient

L is the thickness of wall

k is the thermal conductivity of wall material

hHTF is the heat transfer coefficient for the fluid film

D is the inside diameter of pipe

G is the mass velocity

k is the thermal conductivity at fluid bulk temperature

p is the density at fluid bulk temperature

cp is the specific heat at fluid bulk temperature

u is the absolute viscosity at fluid bulk temperature

uw is the absolute viscosity at fluid film temperature

The equation can be solved for the fluid-film heat transfer coefficient h:

The terms can be regrouped in this manner, assuming that (u/uw)0.16 is equal to 1:

Therefore, the ratio of fluid-film heat transfer coefficients for two heat transfer fluids is proportional to the ratio of their mass velocities, densities, specific heats, thermal conductivities and absolute viscosities raised to the appropriate exponent.

To minimize oxidation of the heat transfer fluid due to contact with air, the expansion tank should have an inert gas blanket. Oxidation will shorten the life of the fluid.

Fluid vapor pressure. A liquid heat transfer fluid system must operate at a pressure higher than the vapor pressure of the fluid at the operating temperature. Otherwise, some of the fluid will flash to vapor. The presence of vapor will cause pump problems and inhibit heat transfer. Low-pressure points in the system include the suction of the main loop circulating pumps, as well as the areas downstream of control valves that regulate flow from the main loop into subloops.

The expansion tank is typically connected to the return header just upstream of the circulating pumps for the main loop. The pressure of the inert gas blanket on the expansion tank can be set high enough to keep the system operating pressure above the fluid vapor pressure.

Pump capacity and net positive suction head. If the new fluid has higher density than the old fluid at the operating temperature, then it will require more energy to pump it. The pump supplier should be consulted to verify that the existing pumps and drives will perform adequately with the new fluid. In some cases, a larger drive may be required.

Net positive suction head available (NPSHA) can be calculated using this formula: NPSHA = expansion tank pressure – vapor pressure of the fluid at the operating temperature + static head between the expansion tank level and the centerline of the pump – pump suction piping losses.

NPSHA must be higher than NPSHR, or cavitation will occur and cause damage to the pump.

Pumpability. At low ambient temperature, the viscosity of any heat transfer fluid increases, so it is more difficult to pump. If the new fluid has higher viscosity at low ambient temperature than the old fluid, then pumping it at low temperature will be more challenging. Heat tracing can be installed on pump suction piping to help warm the fluid. Also, pumps can be started with the discharge valve partially closed to prevent overloading the pump motor.

Some heat-transfer fluids solidify at ambient temperature. For these systems, heat tracing is needed to prevent solidification of the fluid inside transfer lines when flow is stagnant.

It is common for a heat transfer fluid system to have an operating temperature higher than the fluid flashpoint. The flashpoint is the lowest temperature at which an ignition source causes the vapors of the test sample to ignite under the specified test conditions. Examples of flashpoint laboratory tests are ASTM D92, which uses the Cleveland open-cup test apparatus, and ASTM D93, which uses the Pensky-Martens closed-cup testing apparatus.

Since flashpoint values are a function of the test apparatus design and test procedure, open-cup values should not be compared to closed-cup values. ASTM D92 also measures fire point, which is the lowest temperature at which the application of an ignition source causes the vapors of the test specimen to ignite and sustain burning for a minimum of five seconds under specified test conditions.

Environmental considerations. Used heat transfer fluids must be disposed of in accordance with local regulations. In the U.S., used heat transfer fluids are regulated by the Environmental Protection Agency (EPA; www.epa.gov) in 40 CFR part 279: Standards for the Management of Used Oil, which requires spill containment, a spill response plan and training. If leaked, some fluids have a spill reporting requirement. The heat transfer fluid Safety Data Sheet (SDS) should include information on accidental release measures, handling, personnel exposure and toxicity. The SDS for the fluid should be reviewed to ensure that adequate plans for containment, response, training and reporting are in place.

After the engineering evaluation has been completed, a plan for removing the old fluid, flushing the system, and filling with new fluid should be developed. A knowledgeable heat transfer fluid supplier will be able to help the owner develop this plan.

The old heat transfer fluid should be drained completely from the system through drain valves at low points in the system. Pressurized nitrogen may be used to help push fluid to the low points. If drains are not already in place at the low points, they will need to be installed.

Chemical cleaning can be considered as an alternative to the flushing fluid. However, chemical cleaning is typically more expensive, and multiple flushes required during the cleaning process will generate more waste that must be disposed of.

After the flushing fluid has been drained, the system can be filled with the new fluid. If the system does not already have a side-stream filter installed, consider installing one to remove solids during operation of the system. Startup of the system with new fluid should include holding at about 220°F for several hours while circulating through the expansion tank to allow venting of moisture from the system. A blanket gas purge during the venting process can help greatly.

It is valuable to have a monitoring program to track the condition of the heat transfer fluid. Tracking key fluid parameters with trend analysis can detect changes in fluid condition before they become a problem. A monitoring program allows the fluid supplier to provide timely, practical recommendations for comprehensive maintenance for the heat transfer fluid system, so the owner can plan ahead to minimize the potential for an issue that might cause production downtime.

Although the information and recommendations set forth here are presented in good faith and believed to be correct, neither Eastman, nor any of its affiliates, makes any representations or warranties as to the completeness or accuracy thereof. Information is supplied upon the condition that the persons receiving same will make their own determination as to its suitability for their purposes prior to use. In no event will Eastman, or its subsidiaries, be responsible for damages of any nature whatsoever resulting from the use of or reliance upon this information. Nothing contained herein is to be construed as a recommendation to use any product, process, equipment or formulation.

Gerald E. Guffey II is a senior associate engineer in the Worldwide Engineering and Construction Division of Eastman Chemical Co. (100 North Eastman Road, Kingsport, TN 37660; Phone: 423-229-1095; Email: gguffey@eastman.com). He has been involved in design and evaluation of heat transfer fluid systems and fired heaters for more than twenty years. He has been involved in the development of standards for heat transfer fluids as an ASTM member since 1997. He holds a bachelor of science degree in mechanical engineering from Georgia Tech.