Researchers at Argonne National Laboratory (Lemont, Ill.; www.anl.gov) are investigating an electrochemical separation process known as capacitive deionization (CDI; diagram) to extract and recover ions from liquid streams in wide-ranging applications, including battery recycling and biomanufacturing. CDI holds several advantages over traditional separations techniques, such as distillation and liquid-liquid extraction, because it requires no chemical solvents or phase change. It is currently used in large-scale desalination processes, but it also shows promise in product and resource-recovery applications. 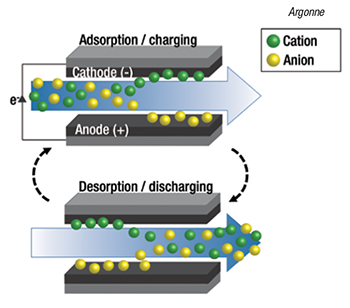 Following dismantling, various components from end-of-life batteries are usually present in a complex, multicomponent liquid mixture, where it can be difficult to efficiently separate critical metals, such as lithium and cobalt, using traditional methods. “CDI gives the ability to target and remove a minority component in a single step. By applying functionalized materials and fine-tuning operational parameters, such as cell voltage, flowrates and the time voltage is applied, we can control ionic separation,” explains Lauren Valentino, an environmental engineer at Argonne. CDI cells employ specialized sorbent materials as their electrodes, which can be chemically functionalized to interact with specific ions of interest. “We are looking for materials that have very high surface areas with many sites for adsorption. Our goal is to add specific chemical functionality to the material surface that invokes some selective interaction between the material and the component we are trying to extract,” adds Valentino.

For battery recycling, the CDI cells incorporate patented high-capacity sorbents developed by NuMix Materials, Inc. (Chicago, Ill.; www.numixmaterials.com) to adsorb critical metals. Currently, Argonne operates a laboratory-scale cell, which, if operated continuously, has an operating capacity of around 10 L/d. For scaling up the technology, the team will continue to fine-tune the operating parameters, as well as investigate methods to separate the deionized and ion-rich streams in the cell.