Can You Trust the Joukowsky Equation for Waterhammer?

The Joukowsky equation is often relied upon to determine the maximum possible fluid pressure inside a pipe, but there are certain scenarios where this equation does not return the expected conservative result for overpressurization

We engineers love our formulas. Especially when we know they can quickly give us a conservative, worst-case answer.

This article summarizes the important points of a recent journal article [1] that discusses three different situations for which the Joukowsky equation does not give a worst-case, conservative answer.

where a is the wavespeed (also known as the celerity) and g is the acceleration due to body forces (32.2 ft/s2 or 9.8 m/s2 for stationary systems at the earth’s surface) due to gravity. The wavespeed is related to the speed of sound in the liquid, but also includes pipe structural interaction. Note that the negative sign in Equation (1) means that a reduction in velocity leads to an increase in piezometric head. Equation (1) is more typically found in civil engineering applications, which frequently use piezometric head and hydraulic gradeline concepts.

The relationship between the change in piezometric head and pressure, P, is given by Equation (2):

where ρ is the liquid density.

Combining Equations (1) and (2) results in a form of the Joukowsky equation that is more frequently used by chemical and mechanical engineers (Equation (3)).

Equations (1) and (3) are essentially equivalent ways of presenting the Joukowsky Equation, and will be used interchangeably in this article. Note that one limitation of Equation (1) is that when the system experiences zero gravity, Equation (1) would have a divide-by-zero problem. In such cases, Equation (3) retains validity and is thus preferred. During my time working in the aerospace industry, I frequently worked on zero- g systems, as well as those with much higher and lower body forces than 1 g (1 standard earth gravitational acceleration). See Ref. 1 for more on this.

The Joukowsky equation traces its history back to the 19th century. In fact, Joukowsky is the lucky author whose name is most often associated with Equations (1) and (3). However, a thorough review of the early literature shows that others derived this equation prior to Joukowsky — for applications in blood flow [3].

Before discussing the cases where the Joukowsky equation does not result in a conservative answer, it should be realized that the equation has numerous limiting assumptions. From Ref. 1:

“ In principle, Equation 1 only claims validity the moment after the velocity decrease (e.g., valve closure). However, practicing engineers often apply it as if it retains validity both immediately after the velocity decrease/valve closure, as well as at all times thereafter, assuming that no other independent transients occur. Since Equation 1 is often applied in this manner, the limitations of this equation are discussed with respect to its validity after the initial transient occurs. These limitations are as follows:”

• Minimal fluid-structure interaction with the piping and supports

• No cavitation or gas release

• No trapped, or entrained, gases in the piping (that is, it is initially 100% full of liquid)

The pipe cross-sectional area, A, is given by Equation (4):

Hence, the velocity change if a valve is closed instantly can be calculated with Equation (5).

Cases where the equation does not give a conservative result

These three cases will be explored in three examples discussed below.

As chemical engineers are keenly aware, when liquid pressure drops to the local vapor pressure, the liquid will flash and vapor will be generated. This is called transient cavitation. It is transient because in a waterhammer situation, a reflecting transient pressure wave will typically and quickly repressurize the pipe and collapse the vapor. It is usually not a sustained, two-phase flow situation, but a temporary two-phase situation that quickly returns to single-phase in most cases.

Moreover, it has been shown experimentally that when transient vapor pockets collapse, the resulting pressure spike can exceed the values returned by using Equation (3). Example 2 discusses this. 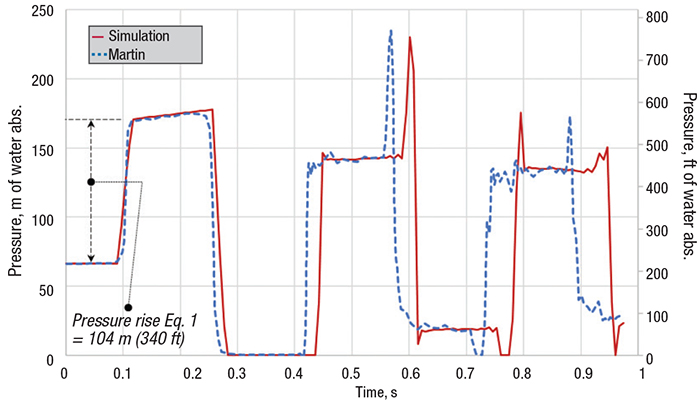 FIGURE 1. The graph shown here, from Example 2, illustrates the experimental and numerical predictions of pressures during transient cavitation, compared to the maximum predicted pressure from the Joukowsky equation (from Ref. 1)

Example 2: Transient cavitation and vapor collapse. Figure 1 shows the experimental results [5] and the commercial software simulation results [6] for a 102-m (335 ft) coiled copper tube experiencing waterhammer. Equation (1) predicts a maximum pressure rise of 104 m (340 ft), resulting in a peak pressure (when added to the steady-state pressure) of 171 m (560 ft) near 0.1 s. Thus, the initial pressure rise agrees with Equation (1). However, the reflecting wave leads to a pressure decrease, and transient cavitation begins at this location at about 0.3 s. It lasts until just after 0.4 s. This is the point at which the system repressurizes and collapses the vapor cavity. Both the experiment and the simulation show a peak pressure that exceeds the result from Equation (1) at about 0.6 s. This peak is about 235 m (770 ft). Ref. 1 offers guidance on how to quickly check for the possibility of transient cavitation in your system.

FIGURE 2. The diagram shows the system description for the horizontal pipe in Example 3

Example 3: Line pack: recovery of frictional pressure drop. The term “line pack” is commonly used, but is not very descriptive of the process. So before trying to describe what the term is, consider a simple conceptual example. First, just think about a steady-state situation. Figure 2 shows a 50-km horizontal pipeline with conditions taken from Example 1. Additional details for the steady-state input data for Example 3 are shown here:

The question we ask here is: What is the pressure at the valve after it has closed, the flow has stopped, and all transients have died out? The answer is trivial. Since the entire pipe is horizontal, the pipe will have a pressure everywhere along its length that is the same as the inlet pressure of 10,000 kPa (1,450 psia).

During a pipeline transient, the frictional behavior interacts with the acoustic nature of the waterhammer wave such that a passing wave does not bring the fluid to a complete rest, even after a valve is closed. Ref. 7 contains an excellent summary of line pack:

Ref. 7 offers a powerful new method to estimate the combined pressure rise due to line pack and waterhammer. The results will be discussed in the next section. 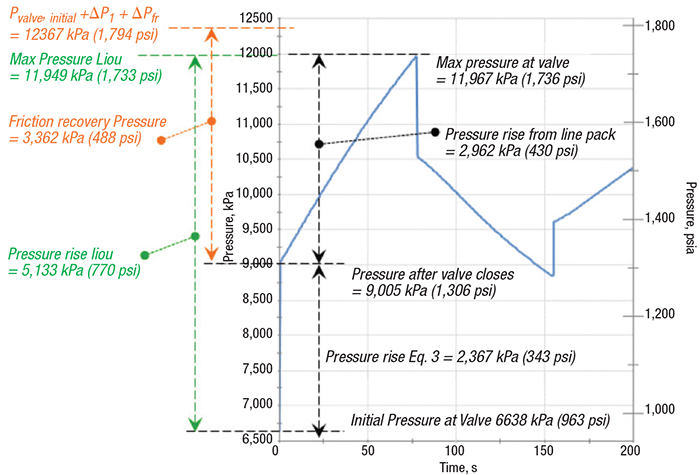 FIGURE 3. To illustrate Example 3, the graph shows the predicted pressure transient at the valve from the system from Figure 2, with pressure rise estimation methods (from Ref. 1)

Now let’s see what happens to the Figure 3 pipeline from a waterhammer point of view when the valve is closed. To determine this, we need additional information as shown here for Example 3, assuming instantaneous valve closure:

A truly conservative maximum pressure rise can be obtained by adding the two together, as shown in Equation (8):

The maximum possible pressure is then obtained by adding the Equation (8) pressure rise to the initial valve pressure (Pvalve). This result is 12,367 kPa (1,794 psia), as shown in Figure 3, where the results from a full transient simulation are also shown. The method in Ref. 7 by Liou is shown also. Here, it is clear that the maximum pressure of 11,967 kPa (1,736 psia) is much higher than what is predicted by Equation (3).

The line pack pressure rise can be seen in Figure 3 from 0 to about 75 s, and totals 2,962 kPa (430 psi). With a keen eye for line pack now at our disposal, look back to the experimental results in Figure 1. After the initial Joukowsky pressure rise of 104 m (340 ft), it is evident that the pressure continues to increase for another 0.1 s or so. This increase is about 5 m (16 ft), which happens to be roughly the frictional pressure loss. Hence, one can see line pack in the Figure 1 experimental results, as well as the simulation results, when one looks closely. 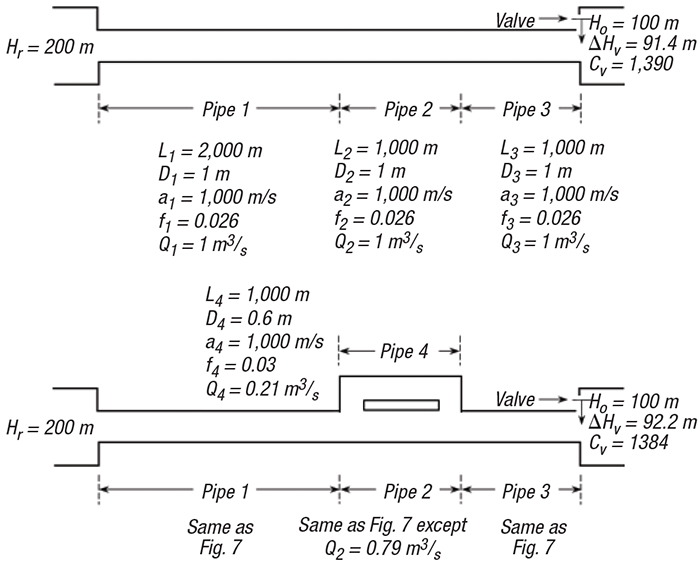 Example 4: Reflected pressure waves. Ref. 1 discusses numerous ways that a reflected wave can cause a pressure rise greater than what would be given by Equation (3). Consider the systems in Figure 4, which shows a straight pipe system and a similar networked system. This example appears in Ref. 1 and was first published in Ref. 8.

In each system in Figure 4, the valve at the end is closed instantly. Figure 5 shows the results. It is clear that the pressure rise in the networked piping is higher than what would be predicted by Equation (1) at 20 s. 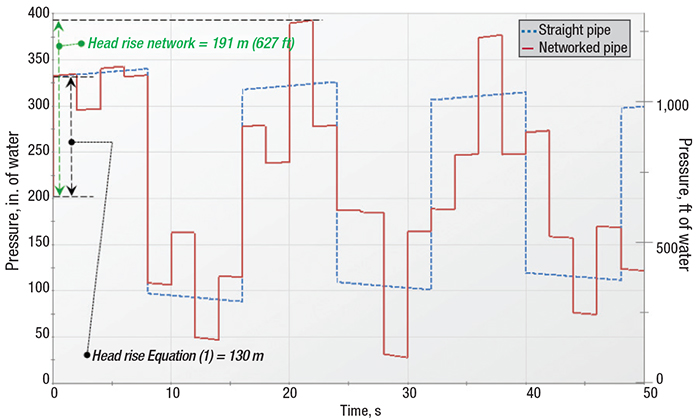 FIGURE 5. Simulation results at the valve from Example 4, using the straight and networked pipe systems in Figure 4 (from Ref. 1)

Numerous other situations can cause reflected waves that exceed the values obtained using Equation (3). These situations include a pipe diameter change, a branch going to a dead-ended pipe and the presence of a gas accumulator [1].

Waterhammer can be a complicated issue to address. When possible, a more detailed analysis than the simple Equation (3) should be considered. Ref. 9 provides some guidance to chemical engineers on how to approach this.

The Joukowsky equation is a powerful tool for engineers when used with a proper understanding of its limitations. Engineers should not assume that it always provides a worst-case, conservative pressure rise. The examples presented here clearly show cases where the pressure rise can be much larger than what the Joukowsky equation predicts. Keep this in mind the next time someone tells you they have calculated “the maximum theoretical waterhammer pressure.” Just smile and reply, “are you sure you can trust that?”

Trey Walters is the founder and president of Applied Flow Technology (AFT; 2955 Professional Place, Suite 301, Colorado Springs, CO 80904; Email: treywalters@aft.com; Phone: 1-719-686-1000). Walters founded AFT in 1993. He holds a B.S.M.E. (1985) and M.S.M.E. (1986), both from the University of California, Santa Barbara and is a registered professional engineer. Walters is the original developer of AFT Fathom, AFT Arrow and AFT Impulse and has taught hundreds of training classes on AFT’s software products in twelve countries across every populated continent. He worked previously for General Dynamics in cryogenic rocket design and Babcock & Wilcox in steam/water equipment design. Walters is a fellow of the American Society of Mechanical Engineers.

Pipes, Tubes and Fittings
A portable pipe beveling tool prepares pipe for welding The Wart Millhog Portable Pipe Beveler (photo) is a right-angle I.D.…
Unlocking Hydraulic Limits in a Revamp
Follow the practical tips discussed here to accelerate hydraulic revamp projects and increase the success rate Conducting a thorough hydraulic…
Understand and Mitigate Waterhammer in Fluid Processes
Waterhammer arises because of sudden changes in fluid flow, and can present significant problems in processes that involve flowing liquids.…
Facts at your Fingertips: Temperature and Rupture Disk Burst Pressure
Rupture disks are non-reclosing pressure-relief devices that protect vessels, such as reactors, from damaging over-pressurization (or vacuum) conditions. Temperature can…
Leak Prevention in Small-Bore Piping and Tubing
Improved understanding of the causes of piping leaks can reduce the frequency of leaks and lead to significantly better performance…