Biogas plants play an important role in defossilization — anaerobic bacteria in these plants break down biomass to form biogas which, on average, comprises up to 60% methane and more than 40% CO2. While the biogas is used to generate electricity and heat in combined power-and-heating (CPH) units or can be upgraded to natural gas quality and fed into the natural gas network, the CO2 has not been utilized to date. Instead, it is typically released to the atmosphere. Now, as part of the ICOCAD projects, researchers from the Fraunhofer Institute for Microengineering and Microsystems (IMM, Mainz, Germany; www.imm.fraunhofer.de) are developing a way to convert CO2 into additional methane.

The underlying chemical reaction — the Sabatier process; CO2 + 4H2 → CH4 + 2H2O — was discovered more than a hundred years ago, but to date it has not been used for direct upgrading of biogas. This endothermic reaction requires a high temperature (around 400°C), which not only reduces the maximum CO2 conversion through thermodynamic equilibrium, but also favors the undesired competing reverse water-gas shift reaction. Also, sulfur compounds generated in the biogas plant can poison the catalyst. 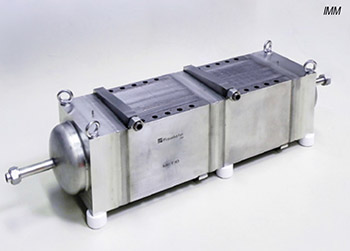 The goal of the ICOCAD I project was to improve the catalyst stability against small amounts (below 1 part per million (ppm)) of sulfur remaining after the sulfur-removal trap, as well as reducing other deactivation processes, such as coking and sintering. Nickel and ruthenium-based catalysts were studied, both in fixed-bed and microchannel reactors (photo). The selected catalyst achieved constant CO2 conversion and CH4 selectivity in long-term (1,000 h) durability tests. When exposed to H2S in the feed, the nickel-containing-catalyst formulation showed improved stability, as it served as a sulfur trap.

The plant concept consists of a two-step methanation with a first adiabatic reactor stage, followed by a plate heat-exchanged reactor with integrated cooling. Such a system achieved more than 97% CO 2 conversion. In the ICOCAD I project, a pilot plant was built that converts 1 m3/h of biogas into 1 m3/h of CH 4, using a 10-kW electrolyzer to supply the H2. In a follow-up project, ICOCAD II, the researchers are scaling this up by a factor of five, and plan to have this operating by 2023. Scaleup to 500-kW is envisioned by 2025, and to 2-MW by 2026.