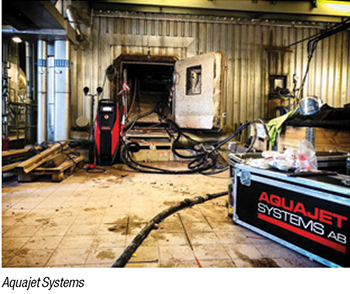 This company’s Ergo System (photo) is a compact hydrodemolition robot used for hazardous cleaning applications, such as those requiring the removal of concrete, coatings, paint, rust, plastic or other materials. The Ergo offers four times the power of a hand lance and provides maneuverability through remote operation to keep workers safer, says the company. Using a number of attachments, the Ergo System can be operated remotely for efficient cleaning and removal of material in boilers, tanks, pipes and other industrial containers and conduits. The Ergo System incorporates a controller unit, which powers and controls the hydraulics, the Ergo power head, which manipulates the high-pressure lance, and either a spine or a climber, which are unique systems used to support and maneuver the power head, based on project needs. The climber attaches to any standard scaffolding or pipes and robotically moves along it to remove material. — Aquajet Systems AB, Holsbybrunn, Sweden

Facts at your Fingertips: Clean-in-Place (CIP) Systems
Cleaning equipment surfaces is critical for processes involving biological materials to prevent microbial contamination. Clean-in-place (CIP) systems play a key…
AI and Position-Sensing Drive Robotics Expansion
Advancements in artificial intelligence (AI) and improved technologies for providing robots with positional awareness have driven an expansion of robotics…
Robotic glove uses micromotors with graphite commutation
Musculoskeletal disorders are a common occupational disease in the E.U. and North America and are one of the most common…
Clariant doubles capacity of its high-throughput catalyst R&D center in Palo Alto
Clariant Catalysts (Munich, Germany) is picking up speed with the successful expansion of its high-throughput R&D center in Palo Alto,…
Robotic device removes catalyst from reactors remotely
A remote-operated, screw-propelled (amphirol) machine equipped with a vacuum hose can remove solid catalyst material from reactors robotically, allowing plants…